Curvy Kenyan Socialite Vera Sidika Has Furiously Responded to The Rumours That There Was No Food at The Lavish Baby Shower She Held Over the Weekend. 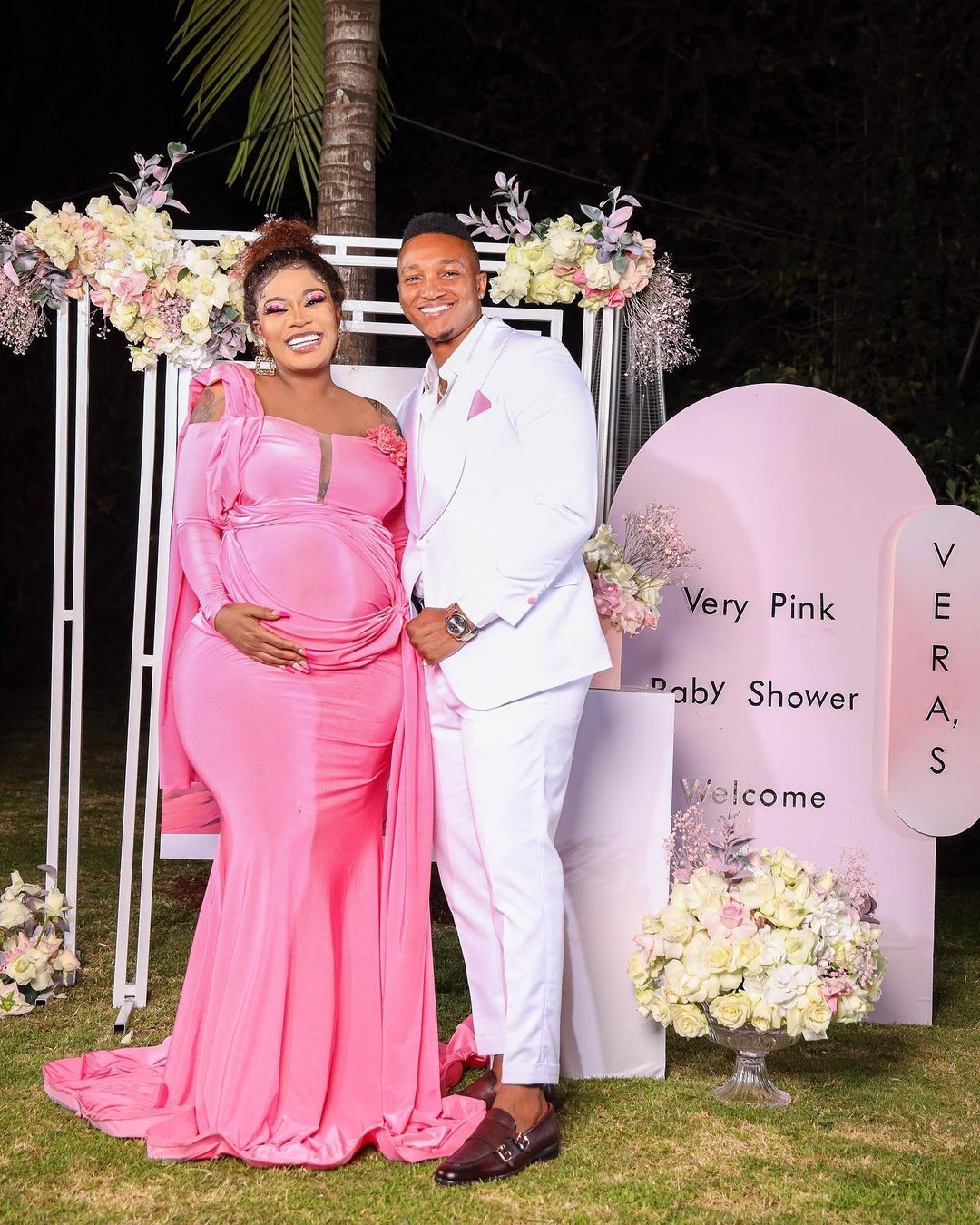 The drama started after a fan on Instagram told a popular Kenyan entertainment blogger called; Edgar Obare that there was no food for the guests who attended Vera’s baby shower.

“Vera hosted a fancy baby shower without food and few drinks. The same thing she did with her baby gender reveal. Why wouldn’t she offer people food, ata snacks” A fan wrote to Edgar after he asked his followers to tell him what happened over the weekend. 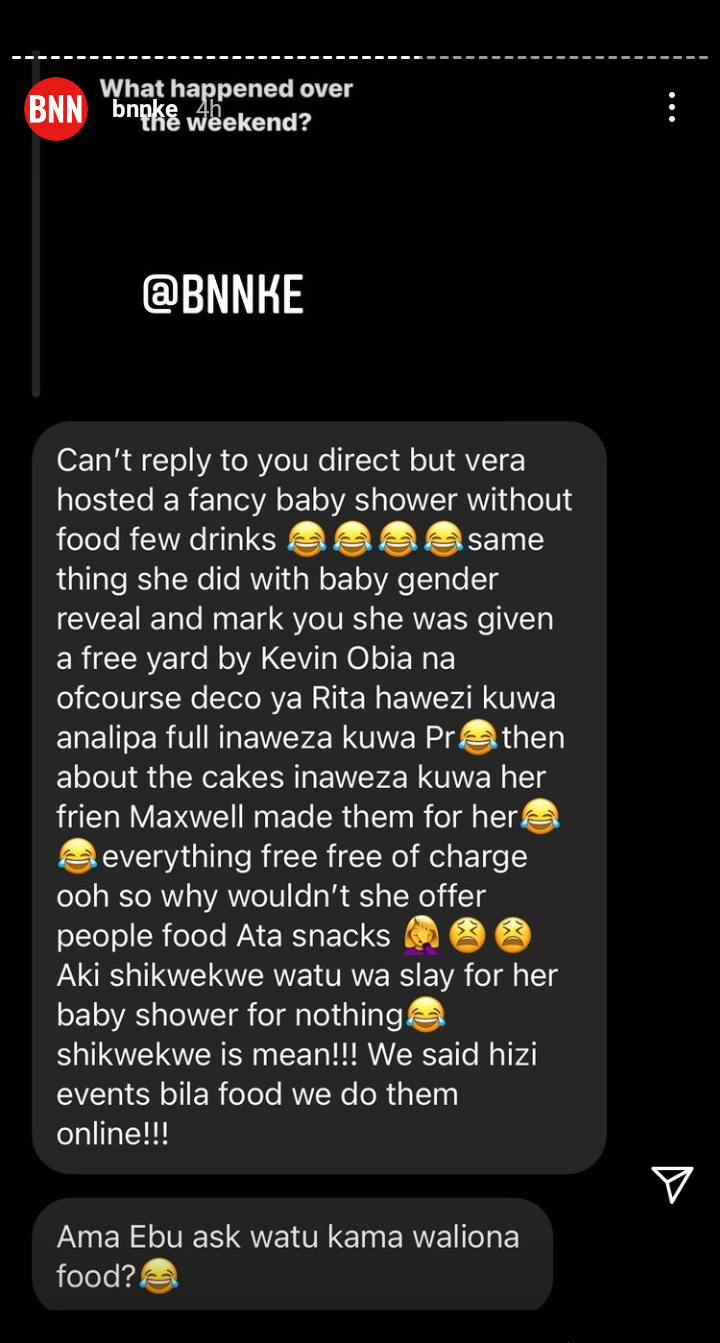 It seems like word got to Vera because three hours later, she shared a post in which she told her fans that Mialle restaurant provided the food and their meals were delicious.

She also shared a photo of a buffet accompanied with an appreciation message for the upscale restaurant. 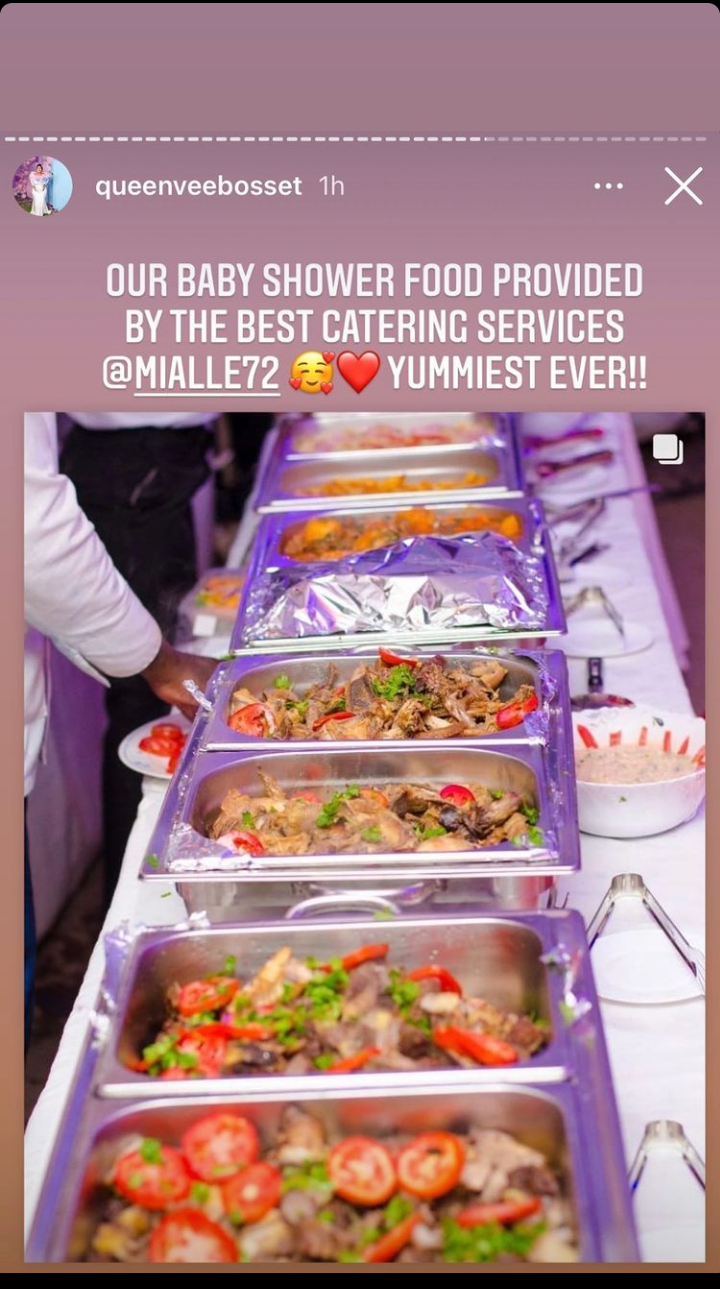 Vera thought that she had everything under control. However, the photo she posted just escalated the situation.

A few moments after her post, another fan accused her of lying and added that she had stolen the photo from the official Instagram page of Mialle restaurant. 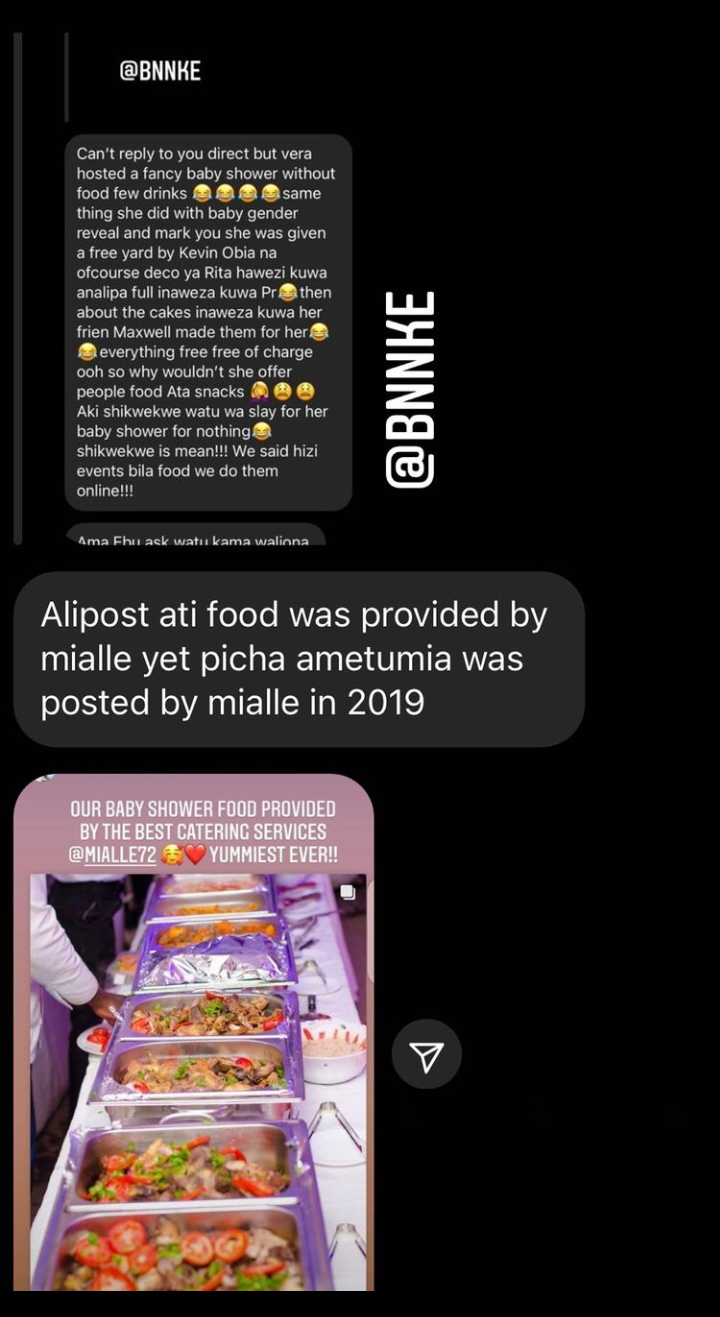 This accusation made the Socialite very furious. She angrily responded on her Insta-stories with a series of posts expressing her frustration.

Vera said that she intentionally posted the picture so that her fans could check out the page and support the business.

“I deliberately posted this old photo here, with the tag showing so you can long press and view it” Vera defended herself. 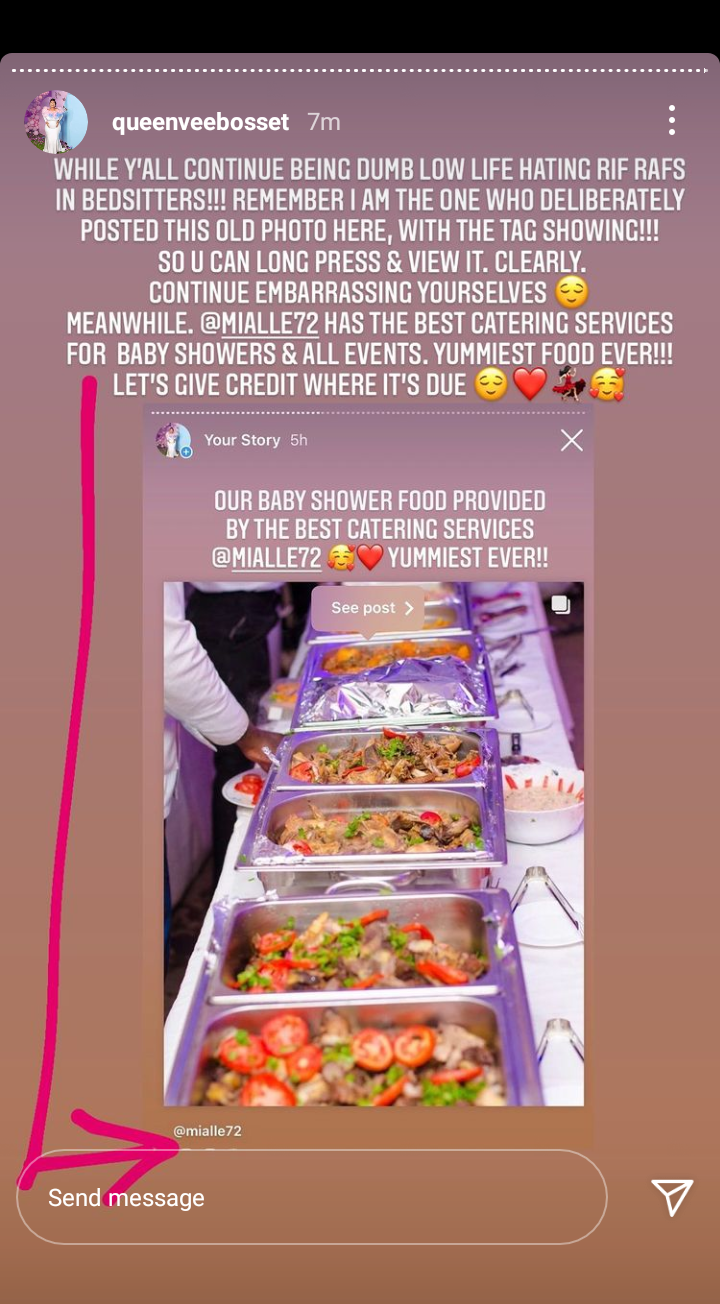 She blasted those who made the accusations and referred to them as villagers who are just hating because they never got invited.

In another post, she questioned why someone who never attended would claim that the event had no food. 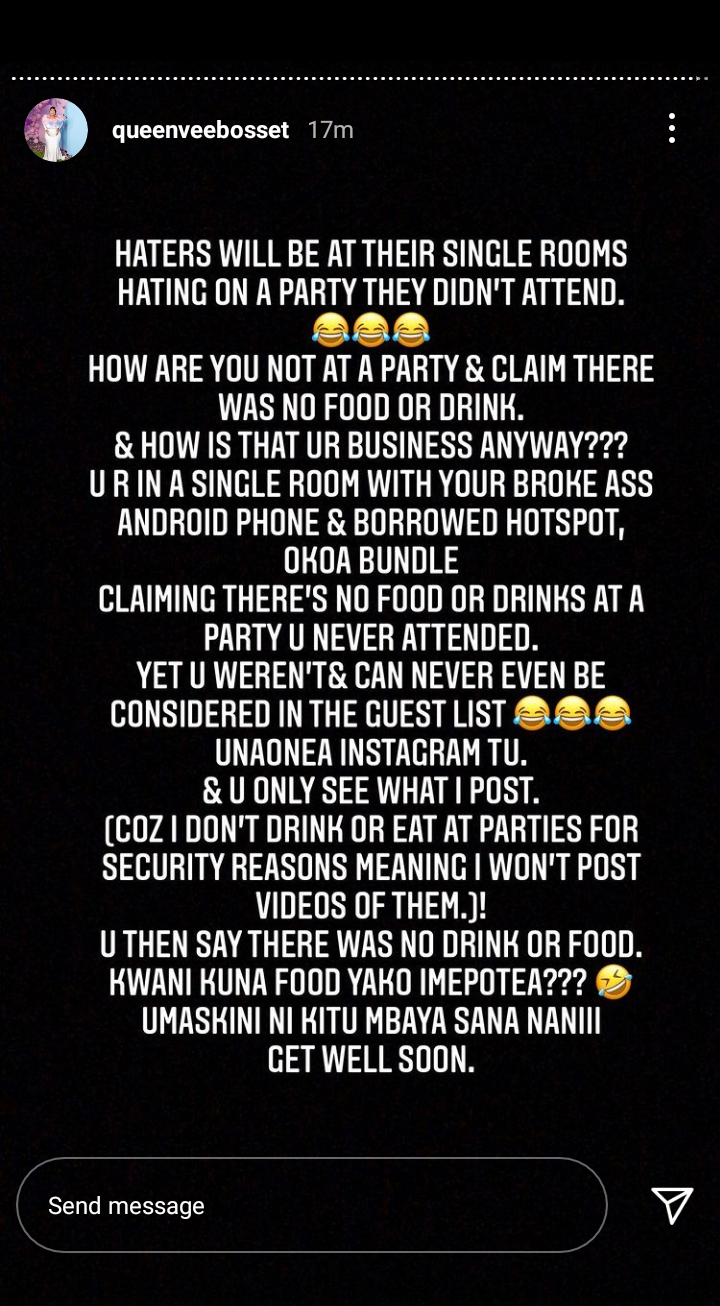 Vera added that those making false accusations about her party are used to attending low budget parties, and they do not know what goes down at a classy one.

“Problem with broke people is that they don’t understand that in high end parties food and buffet set ups are done away from the décor set up” She wrote.

She further explained that most wealthy people leave their houses well fed before attending events, and that is why they rarely eat at parties. 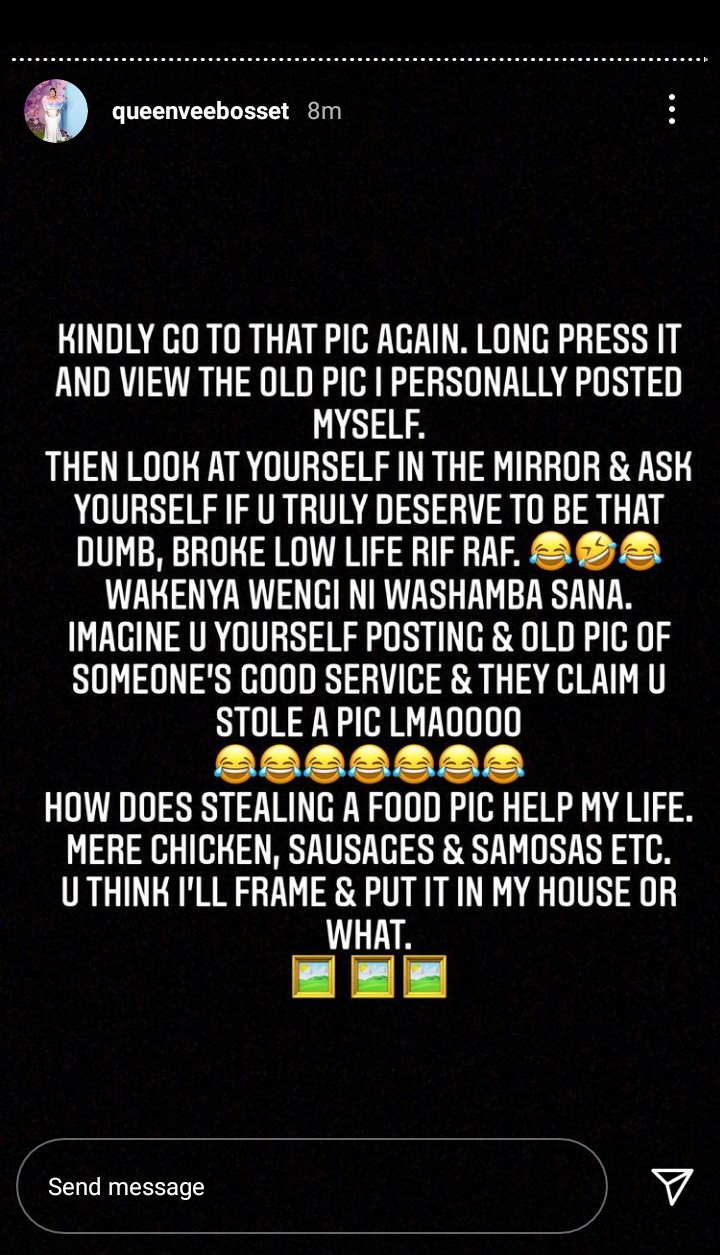 Drama seems to follow Vera Sidika each time she throws a party. In July, Vera got caught up in a back and forth with an upcoming comedian after he accused her of not paying for the services he provided at her gender reveal party.

Vera was displeased with the allegations, and she did not hold back. She responded to his claims by posting several posts explaining her side of the story. 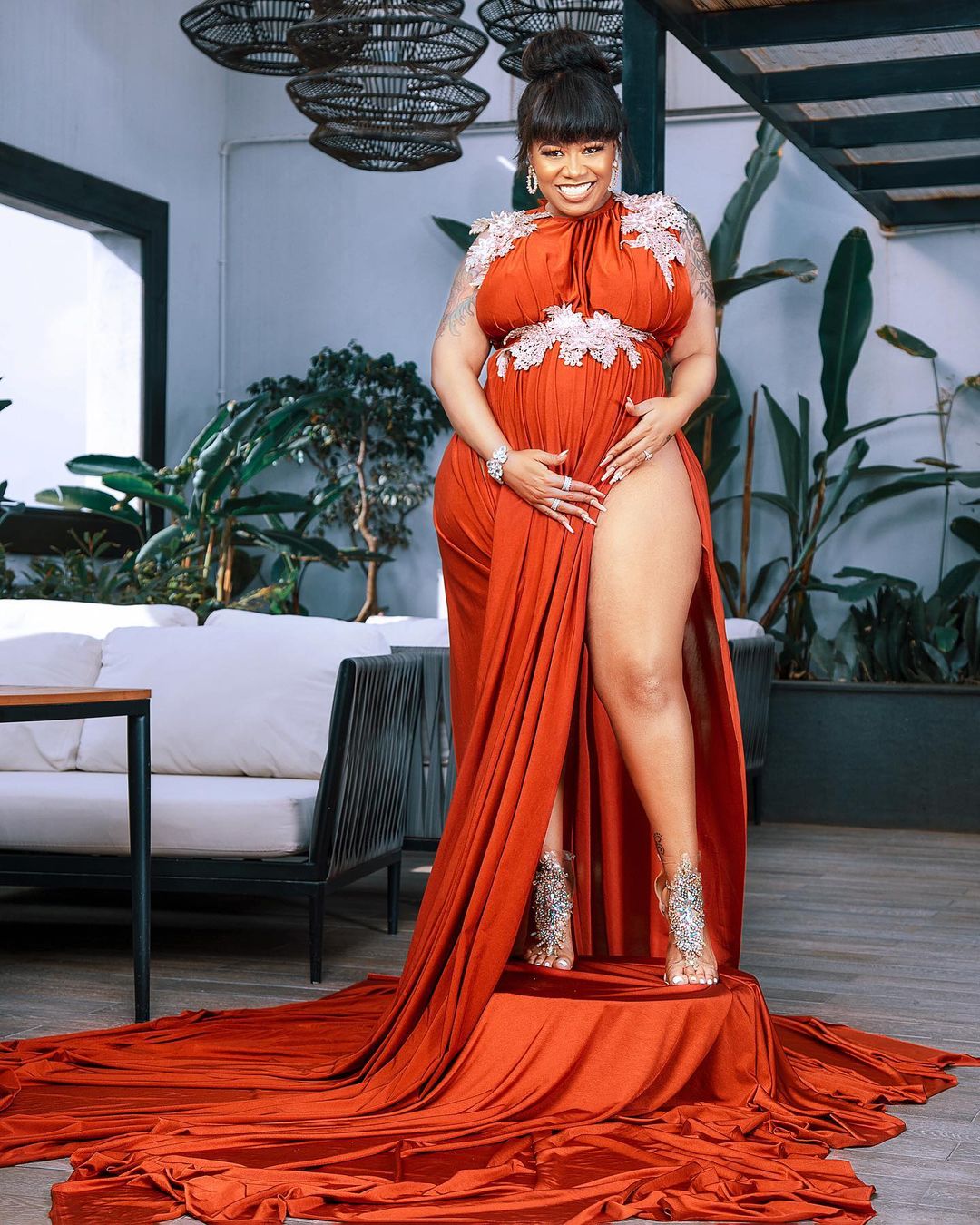 Vera said her assistant made payments in full to all the service providers before the event. Therefore, his accusations were fake.

She also called the comedian unprofessional and warned that such behaviour would scare away future clients.

“If you think you are marketing your biz, you’re wrong. Nobody would ever want to work with someone who runs their mouth to the media over their clients” Vera warned him. 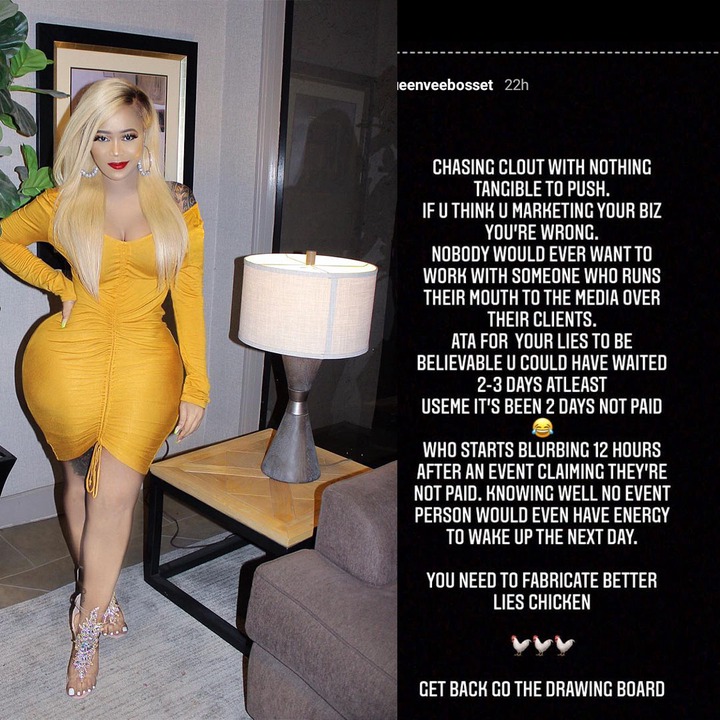 “If at all someone has refused to pay for services, you should go to the police. There was an agreement, show proof, written or oral recordings and get your money” She added. 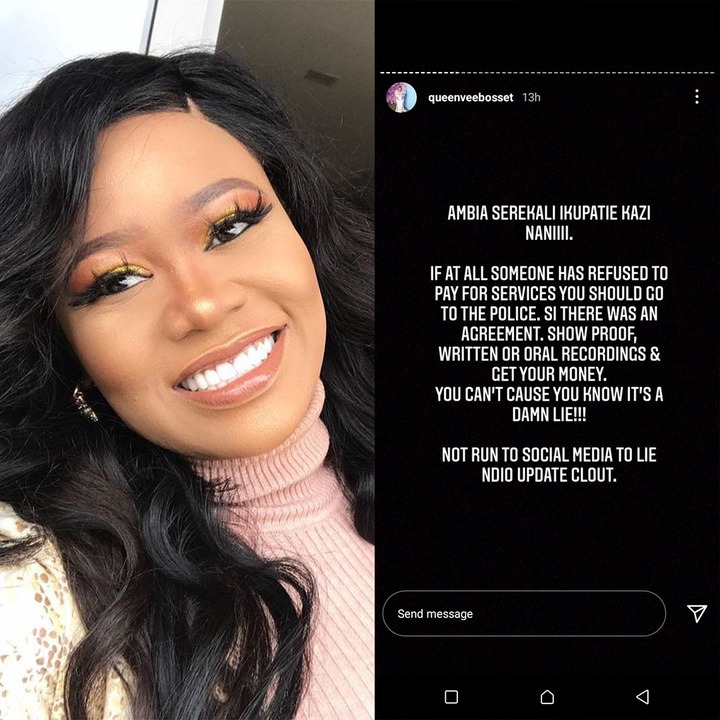 The comedian later apologized, but Vera did not want to hear him out.