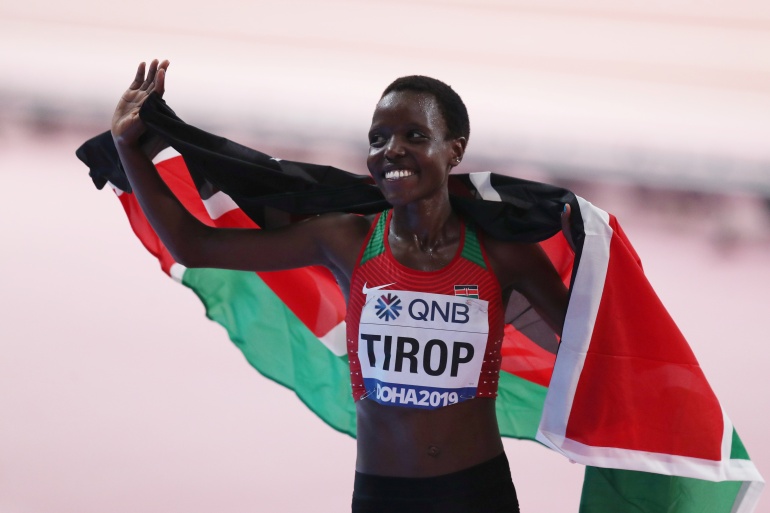 Boniface Mwangi, A Popular Kenyan Human Rights Activist, Has Declared His Support For Divorce Following The Brutal Murder Of Agnes Tirop, An Athlete Who Participated In The 2020 Olympics. 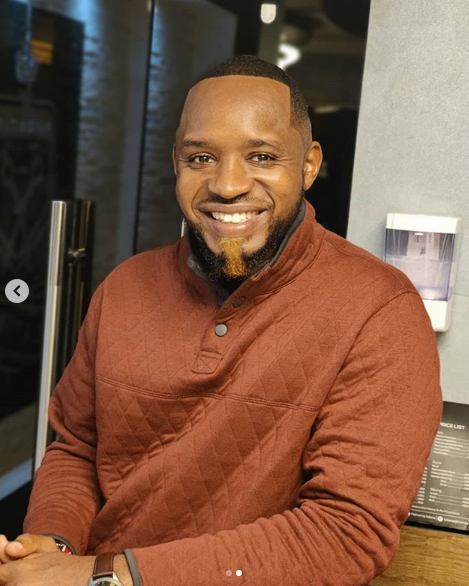 Through a post on his Instagram, Boniface said that he will always support divorce and separation once love fades in a relationship.

He said that couples should normalize walking away from abusive partners because their violent behaviour rarely stops. 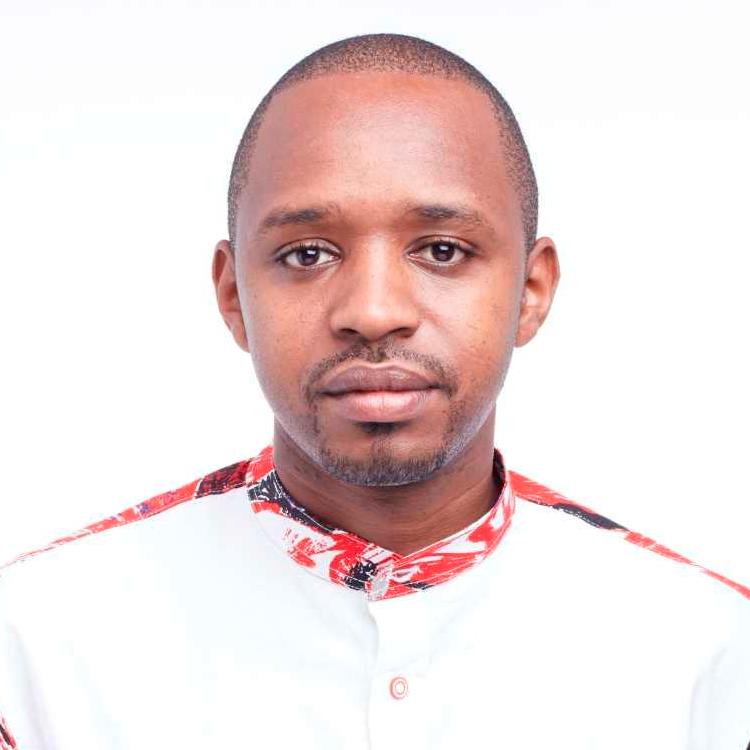 “I support divorce and separation any day, every day. If someone doesn’t feel safe in their marital home, they should leave. If s/he is violent once, they will do it again” Boniface said.

Boniface also alluded to the cruel murder of Athlete Agnes Tirop and argued that she would still be alive today if people around her had not made her reunite with her violent husband. 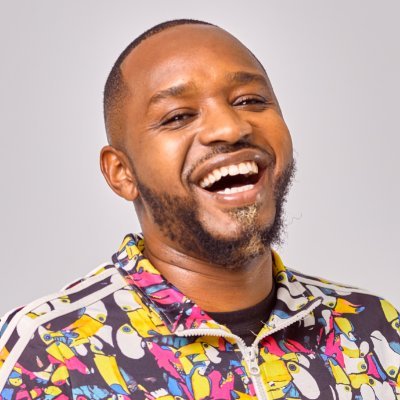 “If “god” hates divorce, he can marry that abusive partner but the abused/mistreated spouse should leave. Athlete Tirop would be alive today if society hadn’t forced her to reconcile with her abusive and jealous husband” He added.

In the same post, Boniface criticized matrimonial vows and said that the oaths made during marriage ceremonies; have forced people to endure violent marriages. 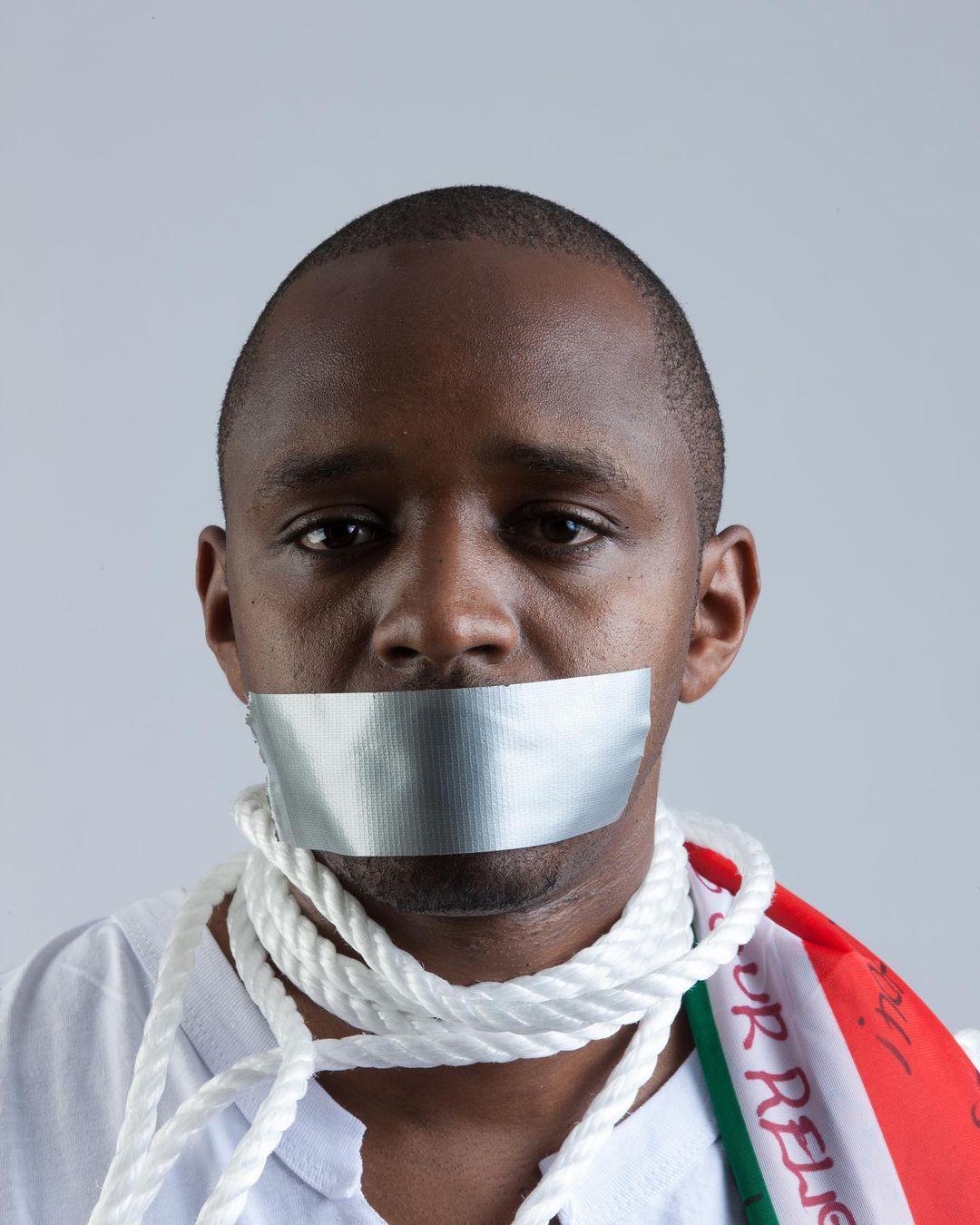 He also advised his online followers not to hold on to miserable relationships because of societal or religious beliefs.

He added that they should put their happiness first and not follow such restrictions.

“The vows of “till death do us apart” have made many people stay in abusive marriages. Don’t let society pressure you to stay in unhappy relationship. Leave. Prioritize your happiness not vows” Boniface wrote. 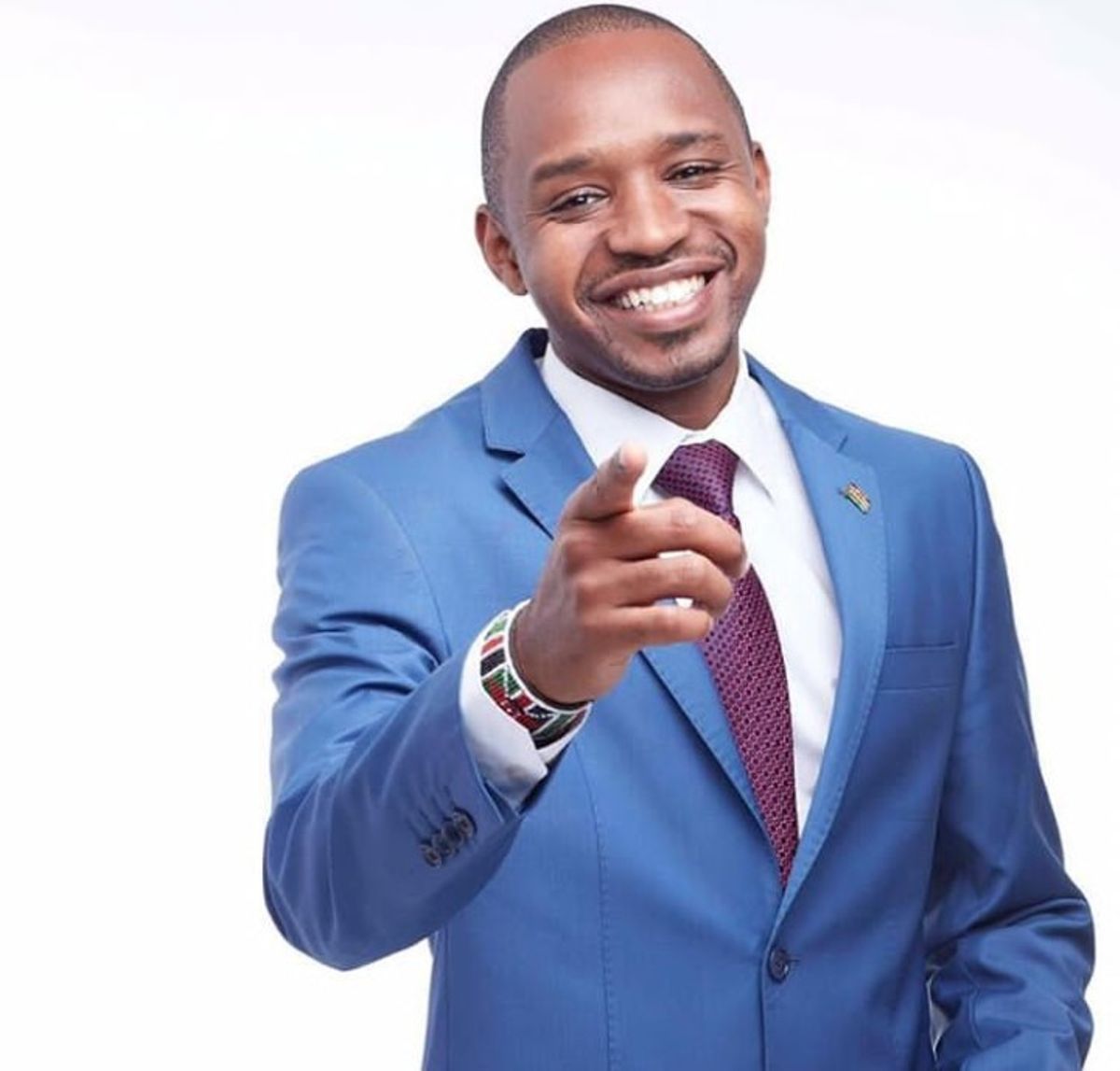 Boniface also advised his followers not to stay in unhappy unions for the sake of children.

He added that children raised in such households get affected by the violence they witness while growing up.

“Even if you don’t fall in love again, you will be alive and safe. Don’t be a statistic of abusive marriages. Kids brought up in abusive marriages grow up with wounds. So even staying for the children doesn’t help them” Boniface concluded. 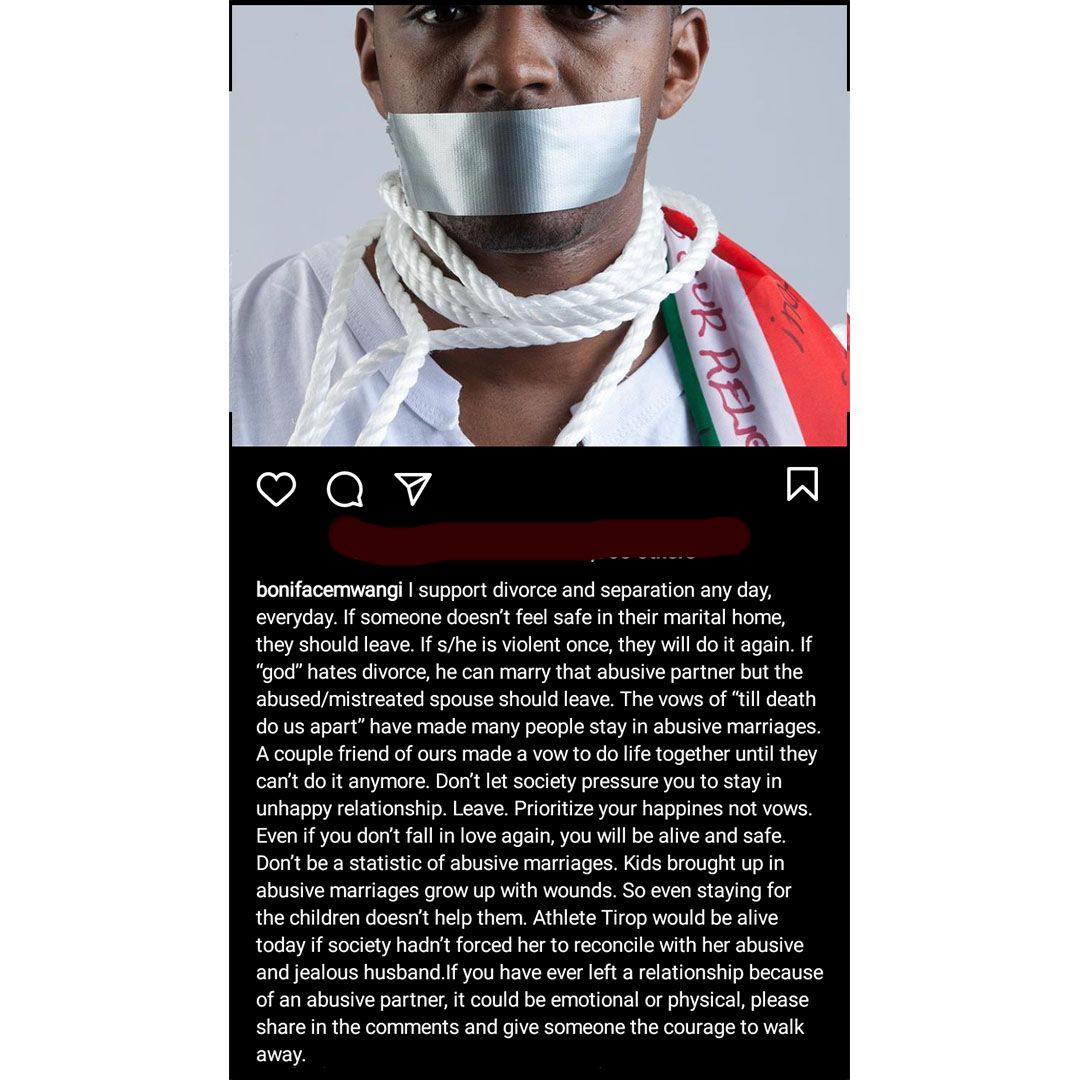 Boniface wrote this message a day after the husband of the record-breaking runner Agnes Tirop got arrested as a suspect in her brutal murder. 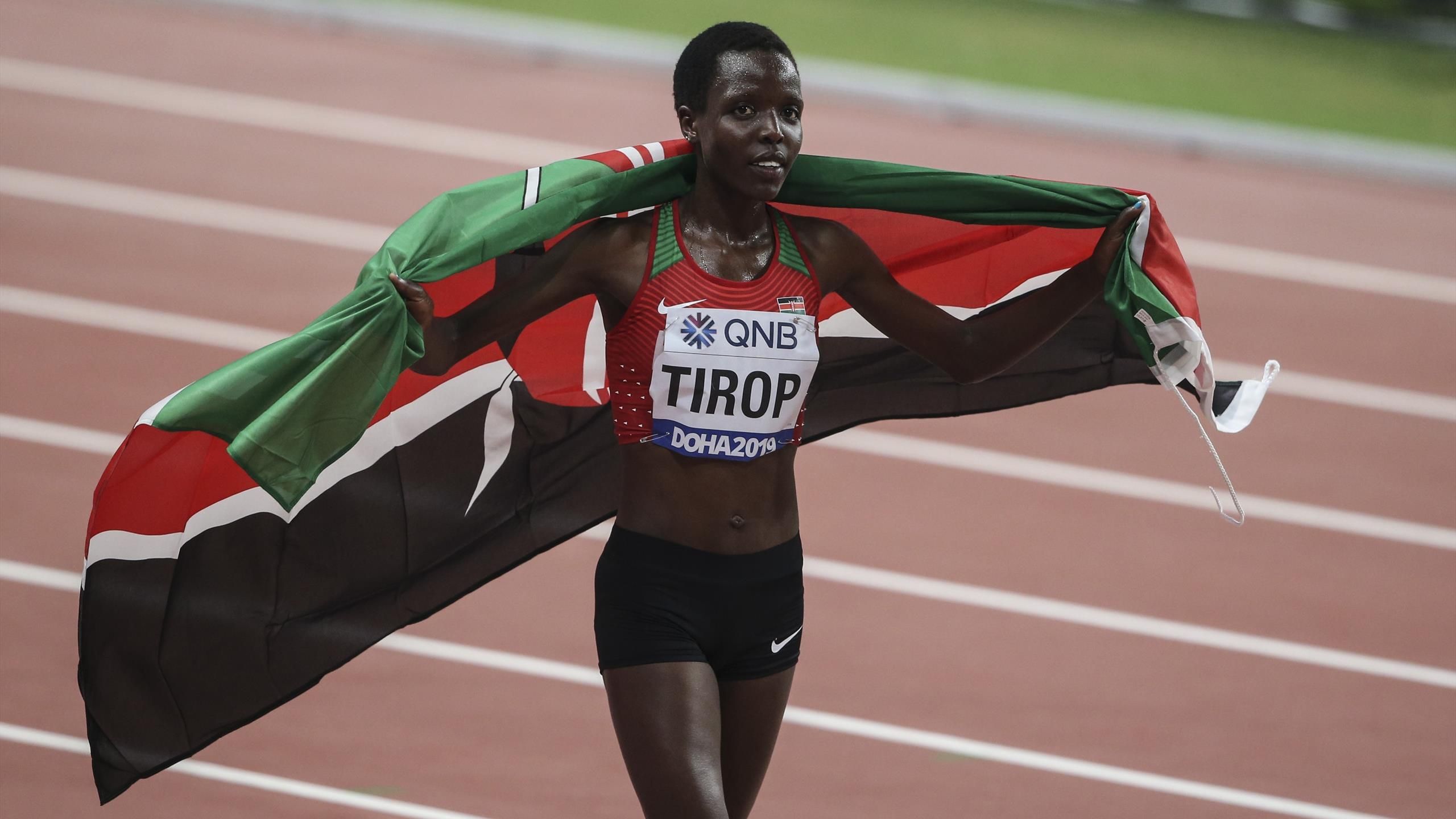 Who is Agnes Tirop?

According to Wikipedia, Agnes Tirop was a Kenyan professional long-distance runner who mainly competed in the 5000 metres and cross country running.

Her career took off in 2015 at the age of 19 after she became the second-youngest ever gold medalist in the women's race at the IAAF World Cross Country Championships. 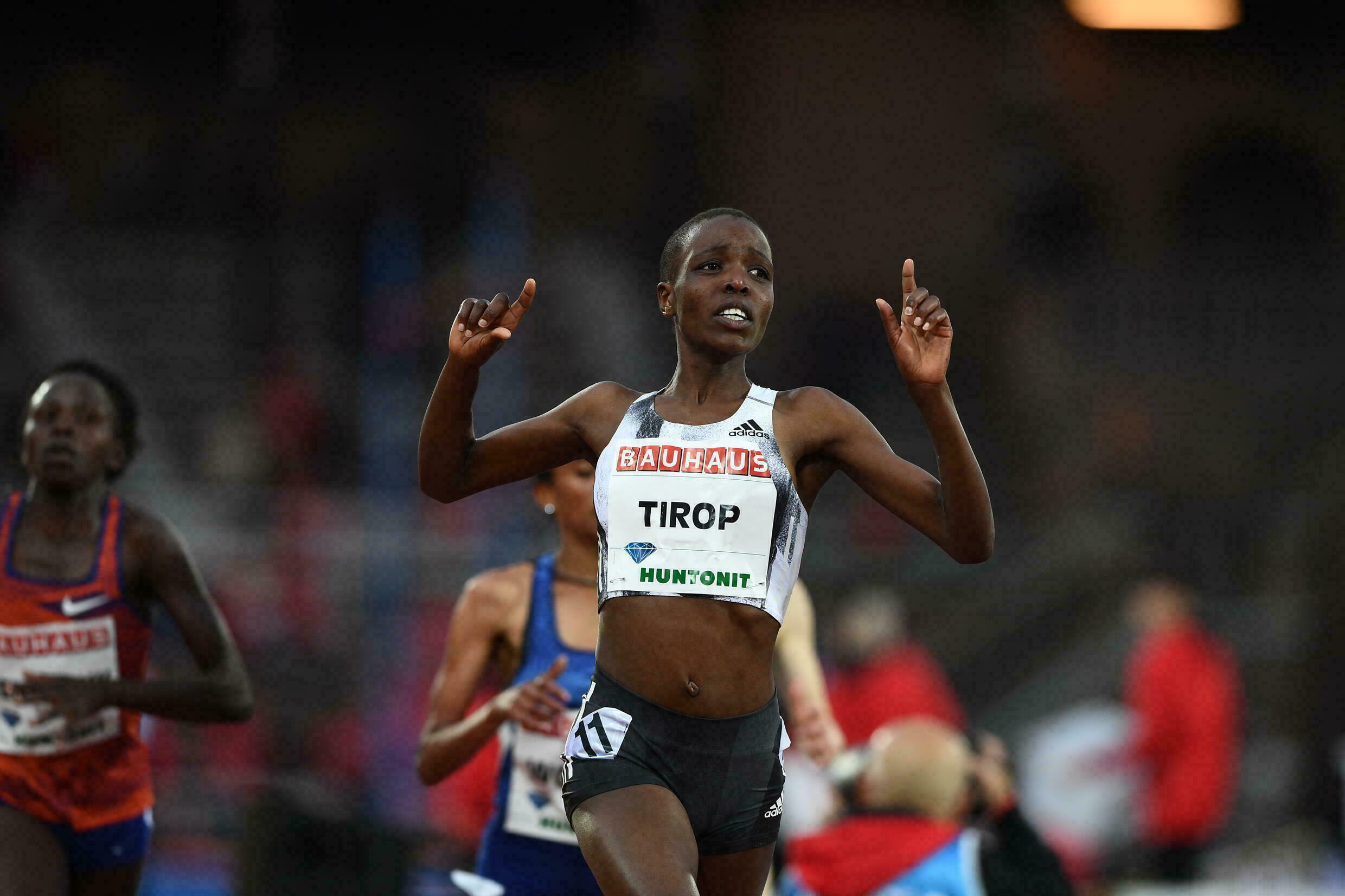 Last month, she broke the world record in the women-only 10-kilometre road race in Germany. A record previously held by Asmae Leghzaoui from Morocco since 2002.

Agnes Tirop was found dead on Wednesday morning lying on a bed at her home in the town of Iten, in Western Kenya.

NTV Kenya reported that the athlete had stab wounds in the neck and abdomen.

The Police said that her car was parked outside the home and had its windscreen and windows damaged They added that it was a possible indication of a domestic dispute before her murder.

Her boyfriend Ibrahim Rotich got arrested as the main suspect after his family disclosed that he had called crying; and; asking for forgiveness. 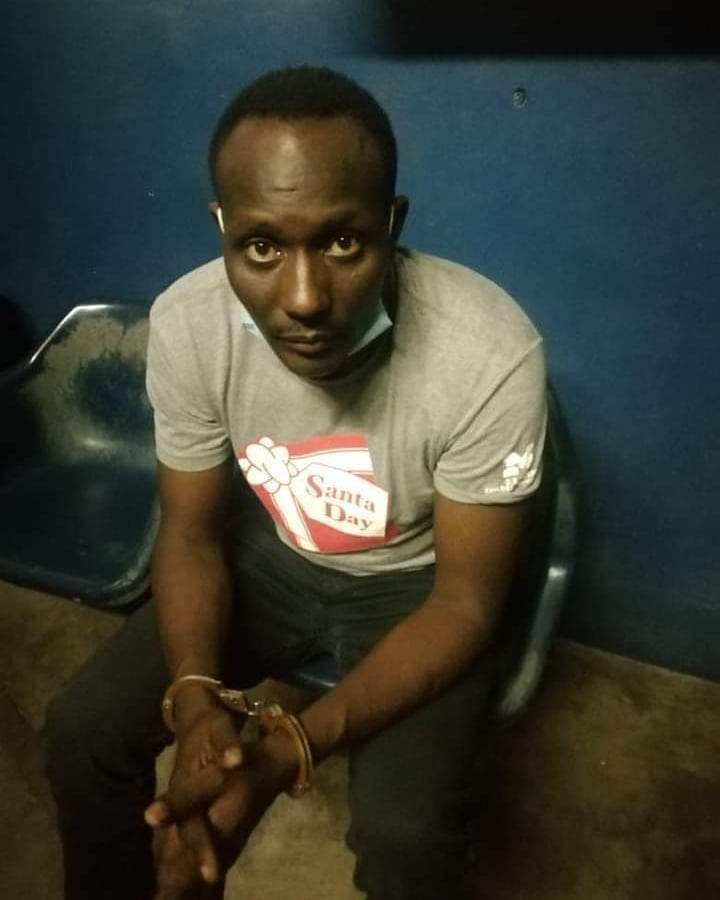 In an official statement released by the Directorate of Criminal Investigations, Rotich was captured in Mombasa while fleeing to a neighbouring country. 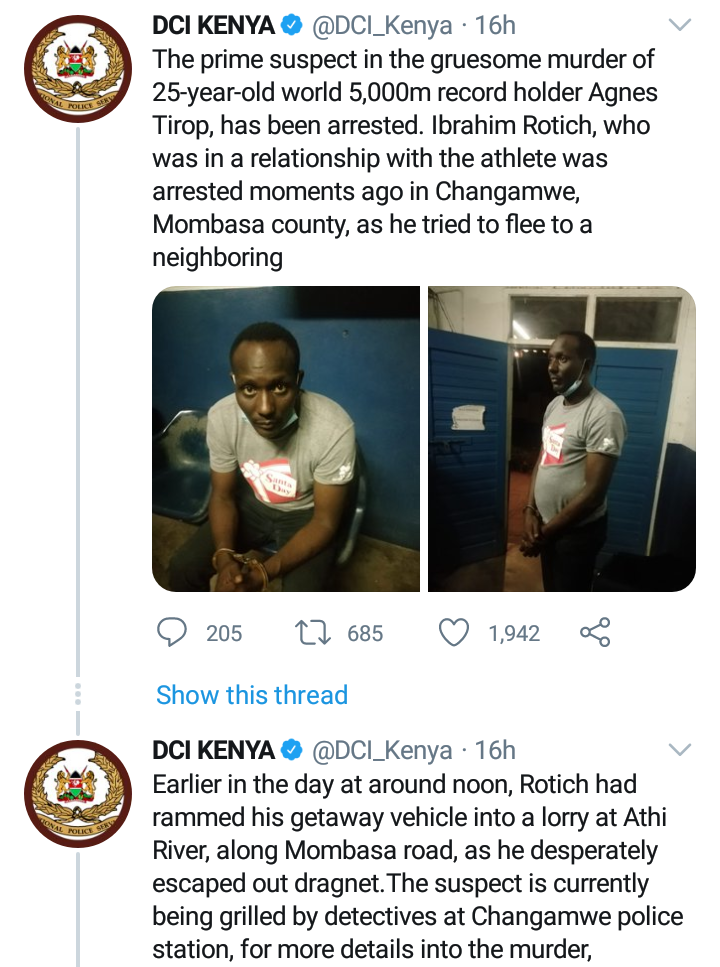 The death of Agnes sent shockwaves throughout the country, and several celebrities, fans, and dignitaries reacted. 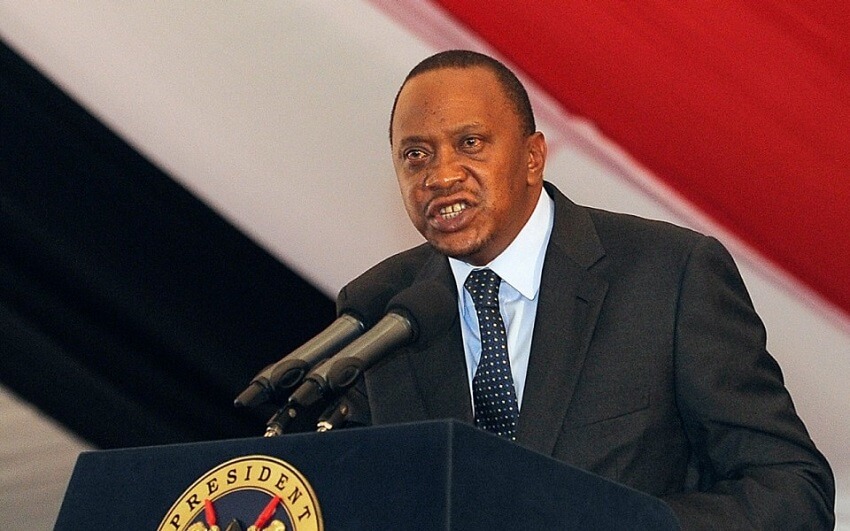 Among those who reacted was President Uhuru Kenyatta. He said “It is unsettling, utterly unfortunate and very sad that we’ve lost a young and promising athlete,”

“It is even more painful that Agnes, a Kenyan hero by all measures, painfully lost her young life through a criminal act perpetrated by selfish and cowardly people.” The President added.