As they say 'old is gold' .2017 has seen a massive comeback from artists we thought were enjoying their retirement. Seems we were wrong to think the likes of TLC were done did with music. Let's all get surprised as we run through a list of some of the artist that have resurfaced.

5. Good Cry by J Boog ft. Chaka Demus
Yes the 'one night stand' and 'murder she wrote' jamaican legends are back with a mediocre tune. It's quite ordinary and for loyal fans such as I, these two got together to do nothing. This video was dropped on 2 June, 2017 and as of now, it has one hundred thousand plus views. Not expected of a collaboration, but the month has just started why am i in a rush?


T-Boz and Chilli have made an impressive comeback. In Way Back they feature Snoop Dogg and everything is perfect. Way back has this old school wave with a sexy feel given T-Boz's husky voice. They were meant to release their album at the end of last year but you know, with all the news in the entertainment industry, they made a wise decision. The amazing part is that these two still look younger that most of you. Well the video was published on 6th June, 2017 and it has 2.5million views. Now you know, in a month they caught up this first.

Way Back Official Video by TLC Click to watch the video.

Mary J Blige did this song with Kanye West then went on to make a remix with Asap Rocky. Maybe she wanted to feature the Kardashian men lol! Anyways this mama is still hot and sound as always. It's official video was published on 9th June, 2017 and it has one hundred thousand plus views, not bad. Let's see how it fairs by July. Otherwise it's a lovely sound with a message we all need. 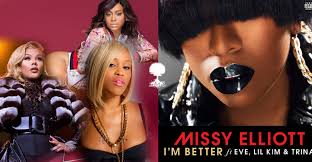 At number 2, we have Missy Elliott's I'm Better Remix. This rap guru teams up with the baddest Legendary women in the game Eve, Trina and Lil Kim. Missy did the original with Lamb then went ahead to team up with Hip Hop most celebrated women. Well this song sounds like a diss track but who knows? So the audio was published on 23rd May, 2017 and it has 1.1million views. For an audio that's crazy. Her original version with Lamb had 20.7 million views

Just when we thought he had settled for acting then he released a hit!!Without blabbing a lot, I'll get straight to the point. The official video was published on 9th June, 2017 and it has 5.3million views and more. It's like his fans were hungry for his music that they all went to youtube when they heard of it's release. He simply talk about the police brutality that Americans and most part of Africa experience. It might be a shot at racism but police brutality is everywhere. Most africans in foreign african countries suffer this a lot.