Harmonize Reveals Why He Broke Up with his Australian Girlfriend Briana

Tanzanian Singer Rajab Abdul Kahali, Alias Harmonize, has opened up about the cause of his break up with his Australian girlfriend, Briana.

Harmonize disclosed that they separated because he had not moved on from his ex-girlfriend, Frida Kajala.

Harmonize also disclosed that he told Briana about his situation with Frida and his feelings for her. 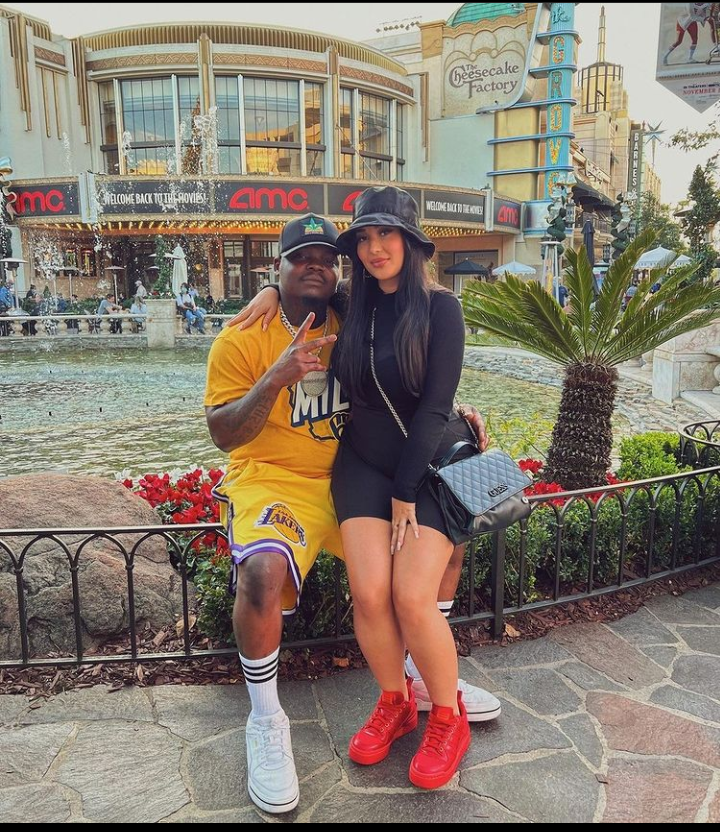 Translation: "As for Briana, I have no problem with her. She is a nice person but we are not together. The main reason is that I told her we separated with someone without a fight and I still love them and I am not sure if I have moved on"

In the same post, Harmonize stated that the second reason for their separation was that neither wanted to leave their countries.

Harmonize said that Briana was not ready to live with him in Tanzania, and he felt the same about relocating to Australia. 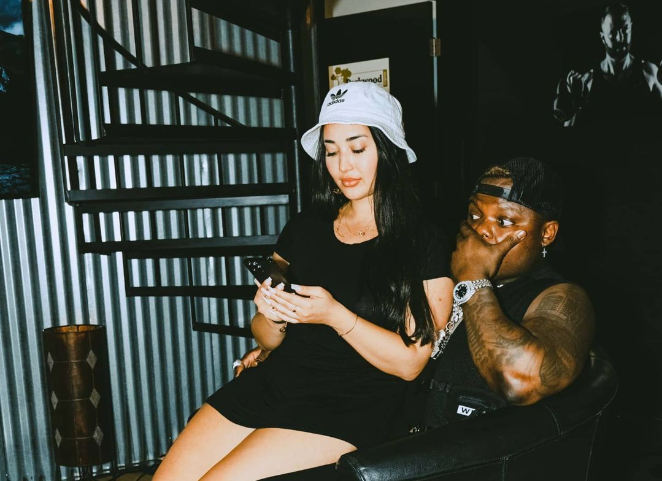 “Number 2 Hayupo tayali kuishi katika nehi yangu pendwa Tanzania nami sipo tayali kwenda kuishi Australia kwa sasa (Number 2 she is not ready to live in my beloved country Tanzania and I am not ready to go and live in Australia at the moment)" he added.

The singer further stated that Briana is a good person and that he would not be answering any other questions about her. Harmonize added that his main focus is to get Frida back.

“Nisingependa kuwe na maswali tena ni mtu mzuri ila kwa sasa ninacho sistiza na mkewangu arudi kwanza mengine yatafuata! (I would not like to have any more questions again. She is a good person, but for now I am insisting that my wife return first, others will follow!)" he concluded.

Harmonize shared this a few minutes after Briana confirmed their separation on her Instagram.

Briana said that they broke up because they both had different priorities.

The gorgeous Instagram model added that their separation was amicable, and she would continue being friends with Harmonize. 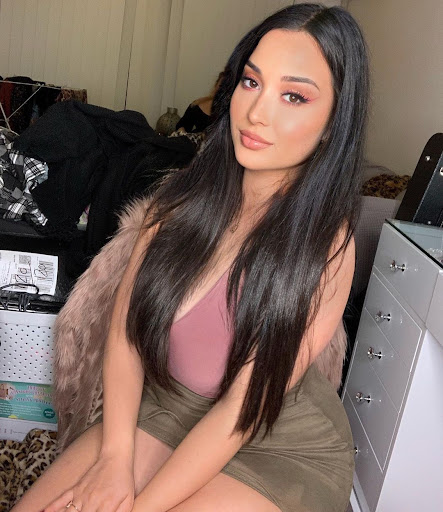 “Hi everyone its Briana, I’m in Australia at the moment. I just wanted to come on here tonight to confirm that yes, Harmonize and I have broken up and have been for a while now” said Briana in a video.

“Unfortunately, it didn’t quite work out in the end as I believe the priorities were a little bit too different for what we wanted in our lives. But we did have an amazing few months together” she added. 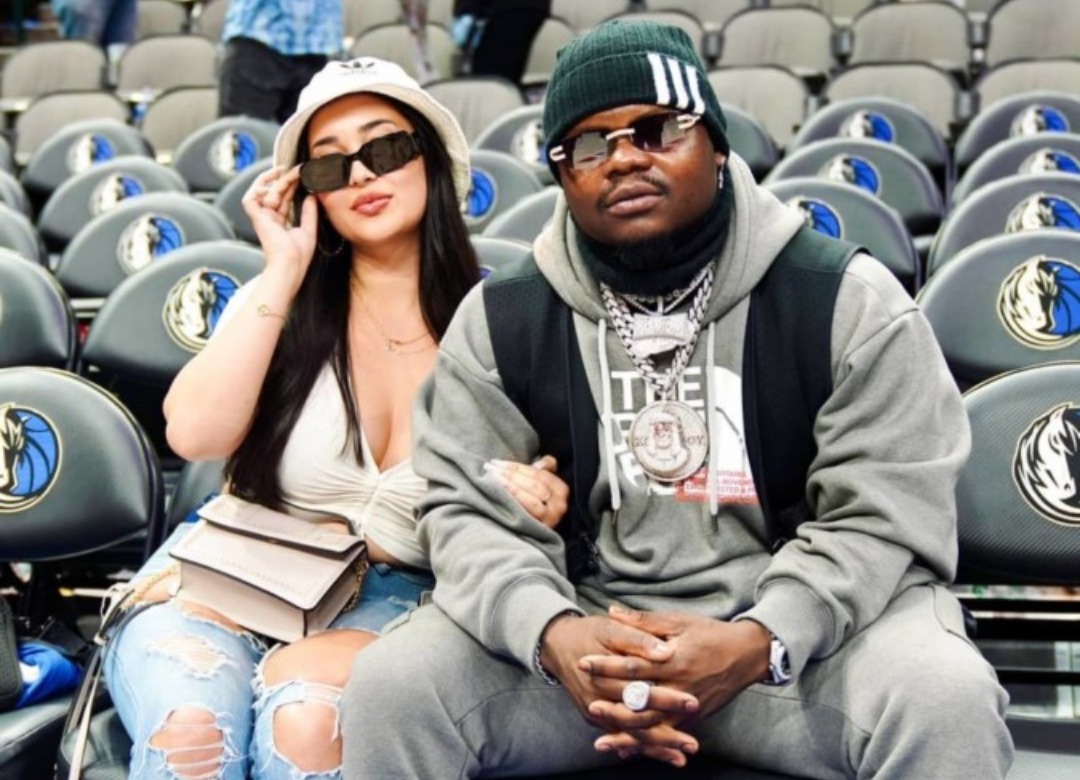 “I am currently at home in Australia. We have indeed parted ways with Harmonize. I wish him all the best in his life. Thank you to all those who supported me when I was in Tanzania and I love them all and for that, I will come back to visit them again. Inshallah” her official statement read.

Their break up announcements come a day after Harmonize pleaded with his ex-girlfriend Frida Kajala to take him back.

Harmonize made a romantic gesture by placing one of their photos on a billboard with the caption, “lovers,” Harmonize further told Frida that he was not happy and he missed her. He also added that everyone around him can tell that he is not content.

“You can see me and trust me. I’m not happy. Everyone knows in the gang I miss you” wrote Harmonize. 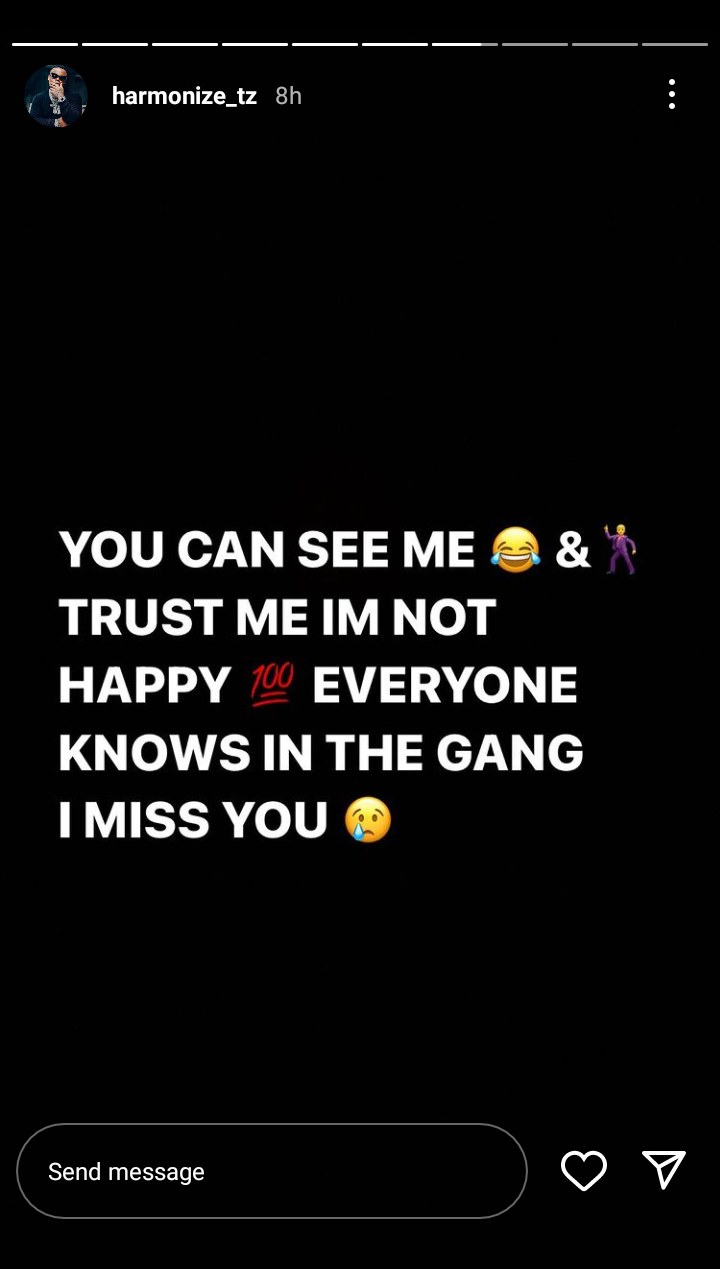 Harmonize also apologized to her daughter Paula Kajala through a lengthy post on his Instagram. In it, he apologized for embarrassing her with his romantic advances while he was dating her mother.

Harmonize added that he did not want to talk about the incident because it was a painful memory. He also said that he would never forget their wonderful memories as a family. 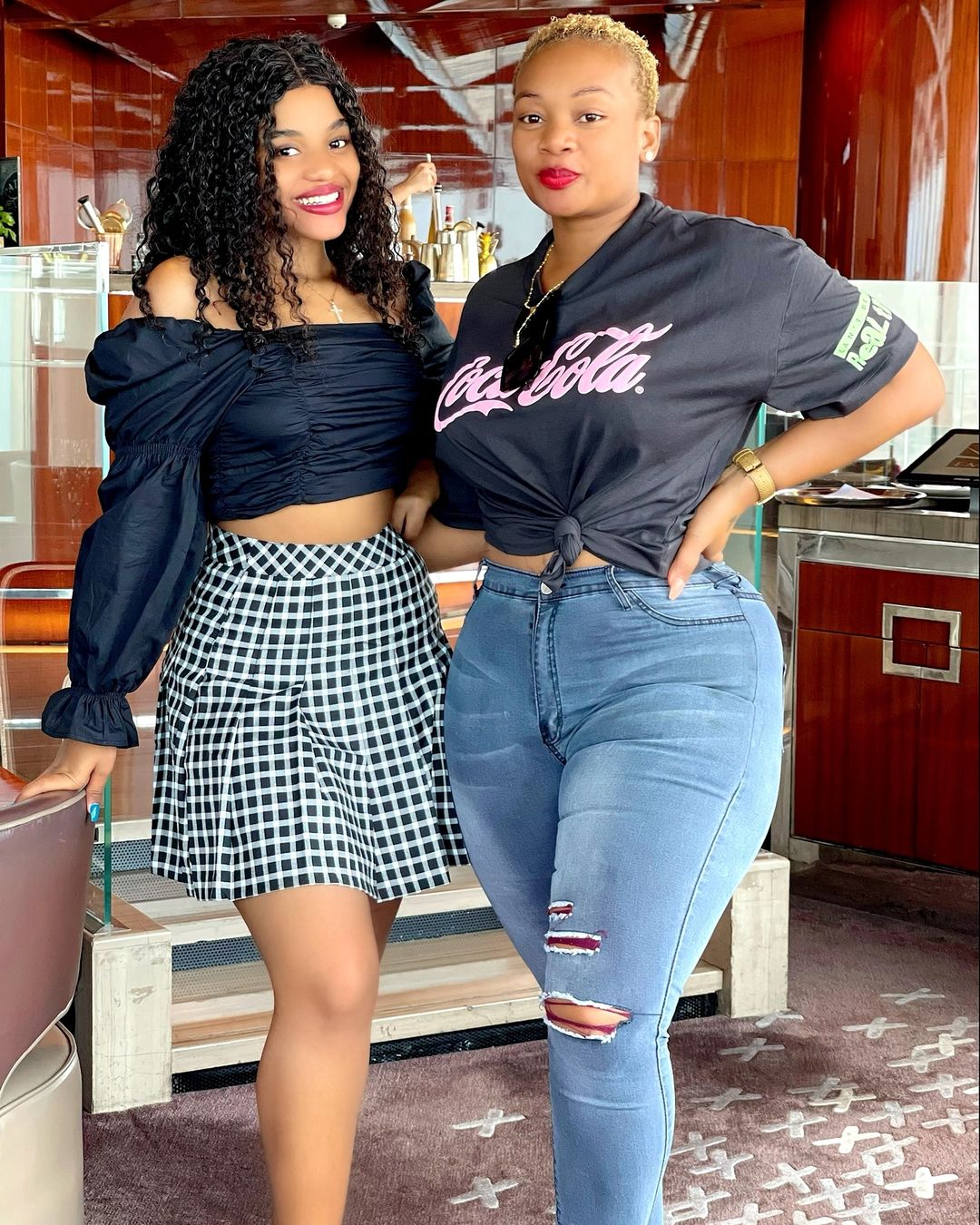 “I’m sorry my daughter. I’m gonna be stupid if I die today without saying this. Sorry for putting you in a very bad position. As a father wa mtoto wa kike pia I don’t wanna go so deep to it because it is so painful. Just know that I’m still proud of you, keep making your momy proud” said Harmonize. 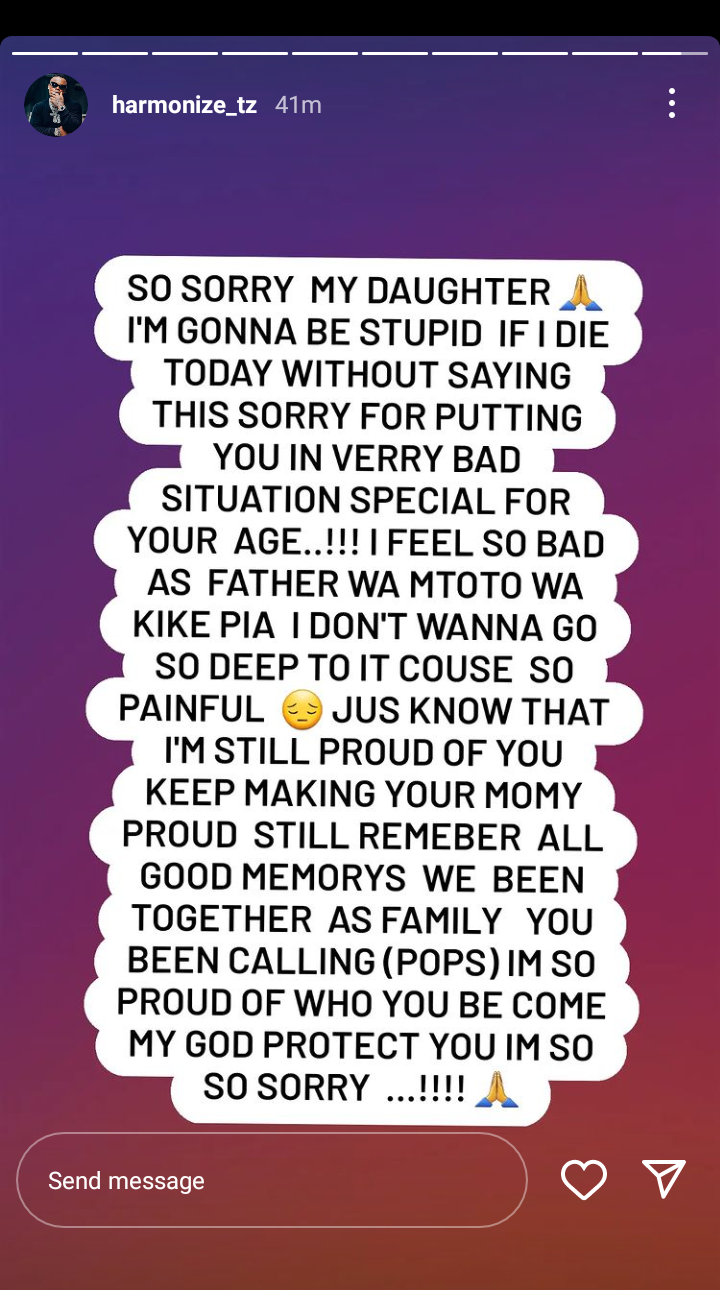 In another post, Harmonize called on God to help him restore his family with Frida Kajala and Paula.

Harmonize and Frida’s Break Up

Harmonize’s request for reconciliation comes a year after Frida Kajala dumped him for allegedly flirting with her daughter.

Frida Kajala is yet to respond to his online pleas. 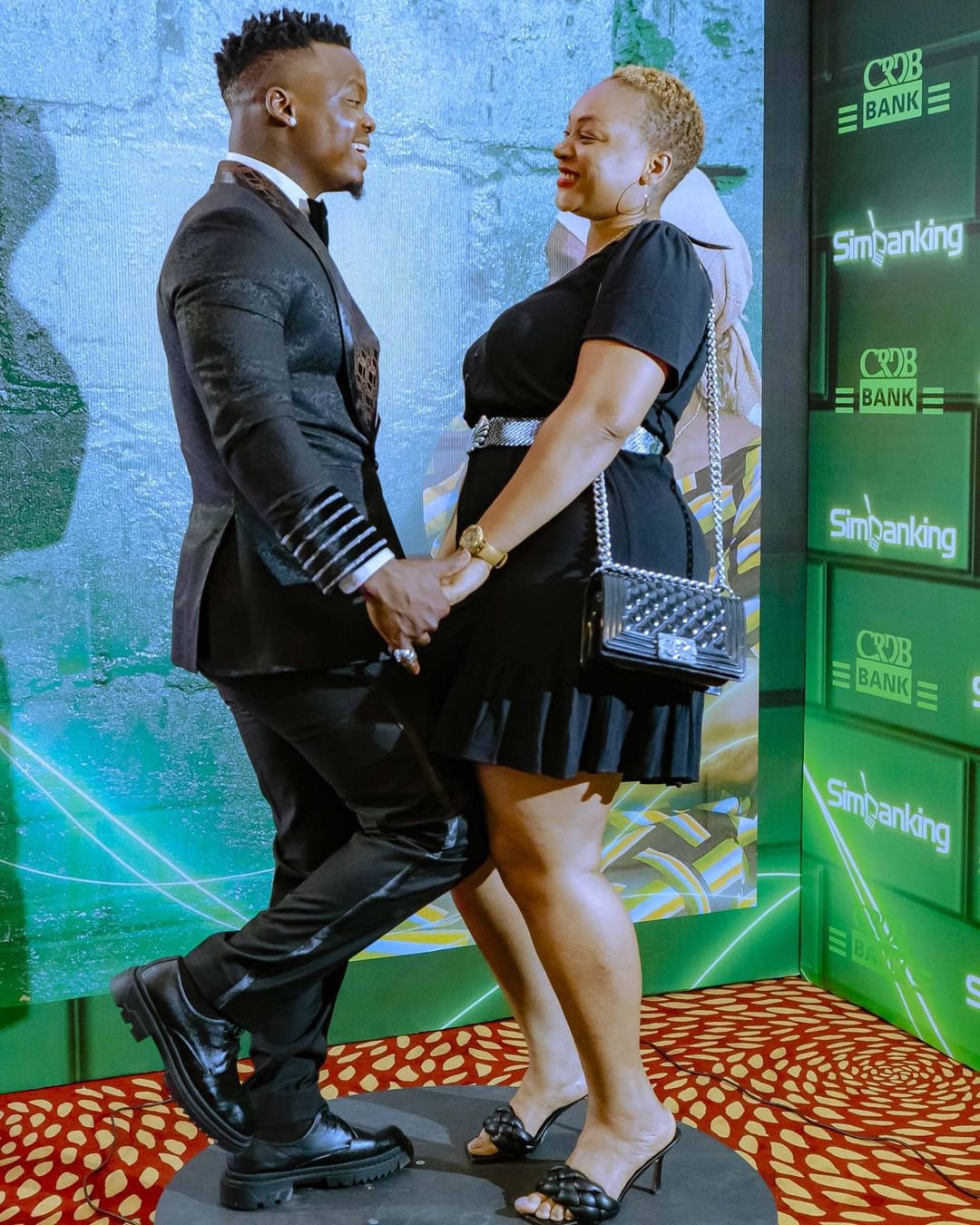