“Blame Him If Anything Happens to Me and My Lover,” Ex-Wife of Kenyan Governor Tells the Public 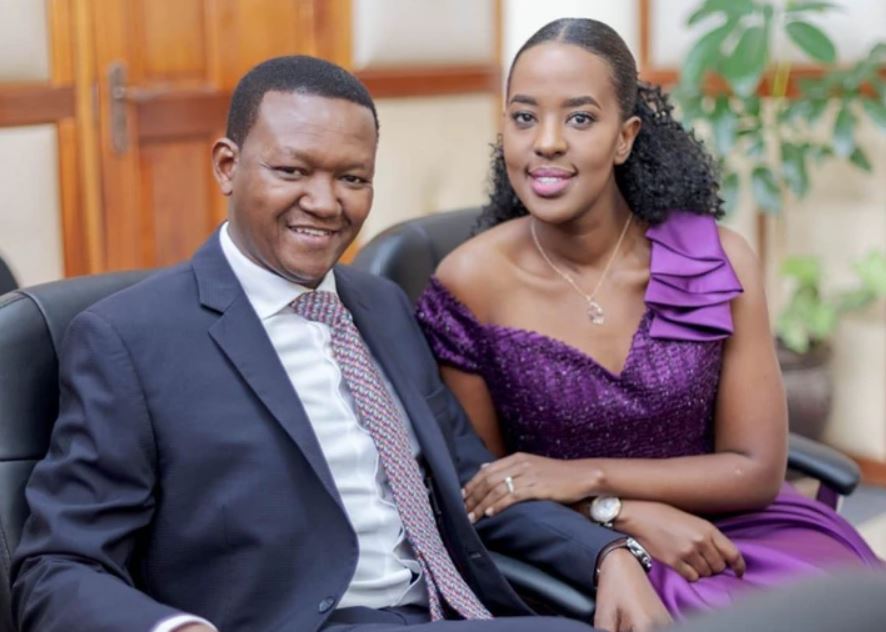 Lillian Ng’ang’a, The Ex-Wife of Machakos Governor Alfred Mutua, Has Asked the Public to Blame Him Incase Anything Happens to Her and Her New Boyfriend, Singer Juliani. He Hired People to Kill Us

In a post shared on her Insta-stories, Lillian called out those hired to harm them and told them not to let the Governor lure them into doing his illegal work.

“If anything happens to Juliani and I, Alfred Mutua is solely responsible. Those hired to kill us should be wise and ask themselves if Alfred would do their dirty work if roles were reversed” Lillian wrote. 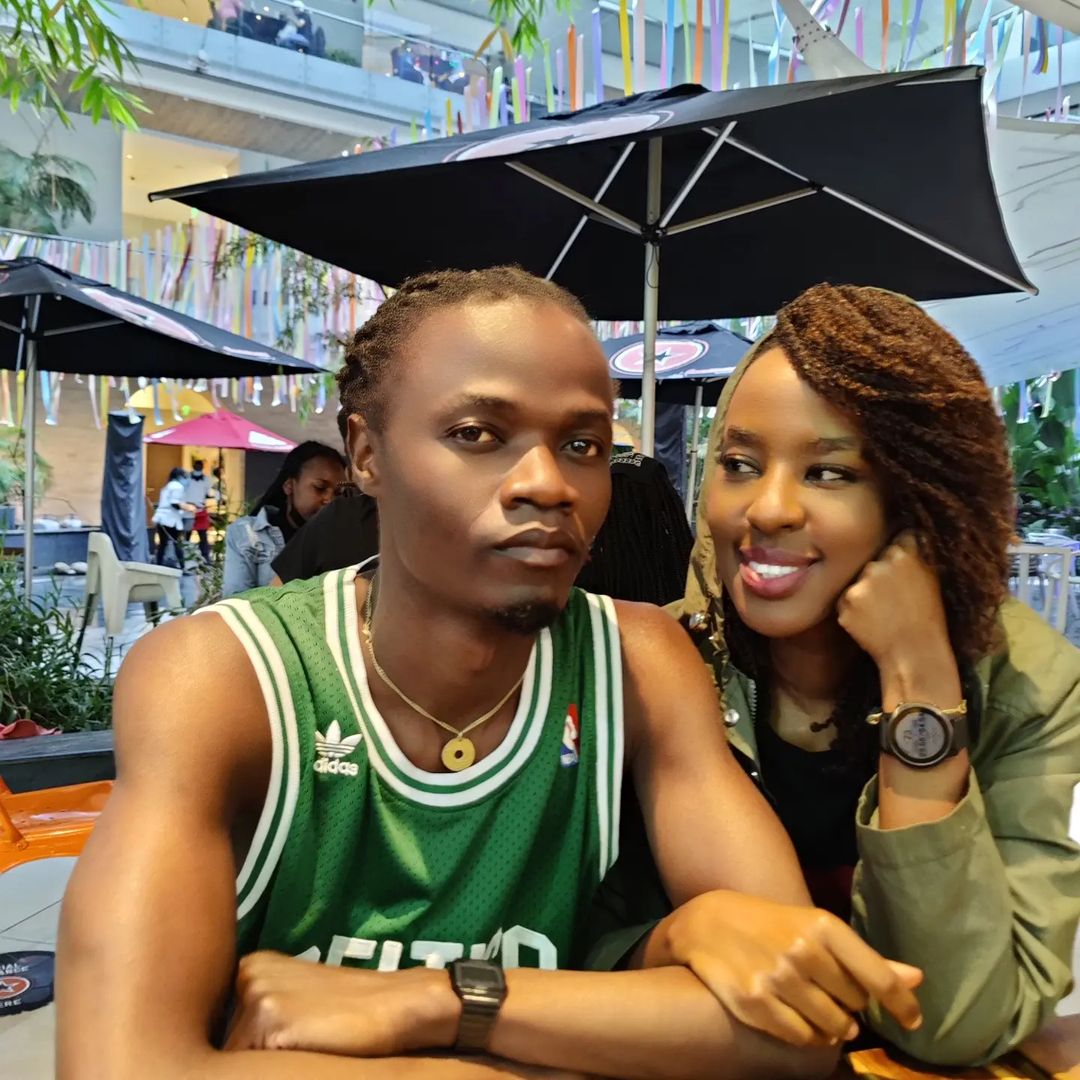 Lillian also called out the Governor’s social media team and warned them not to avenge issues they know nothing about.

She advised them to concentrate on helping him become a president since he is aspiring for the 2022 presidential seat. 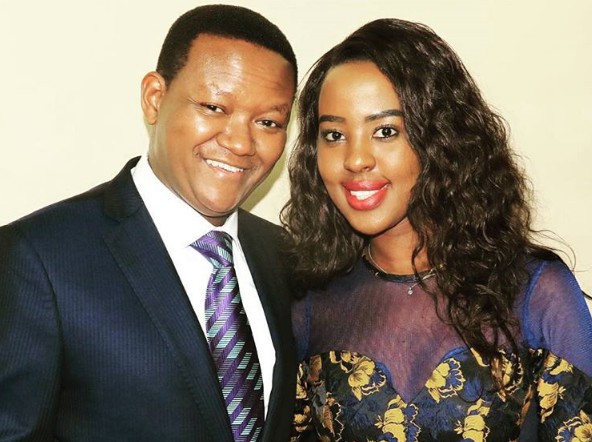 “Alfred Mutua’s social media team. You seem to forget that I know all of you and how you guys work. I saw you guys as you were being hired. You continue to be used and misused to fight personal wars that have nothing to do with you. Shame on all of you!” 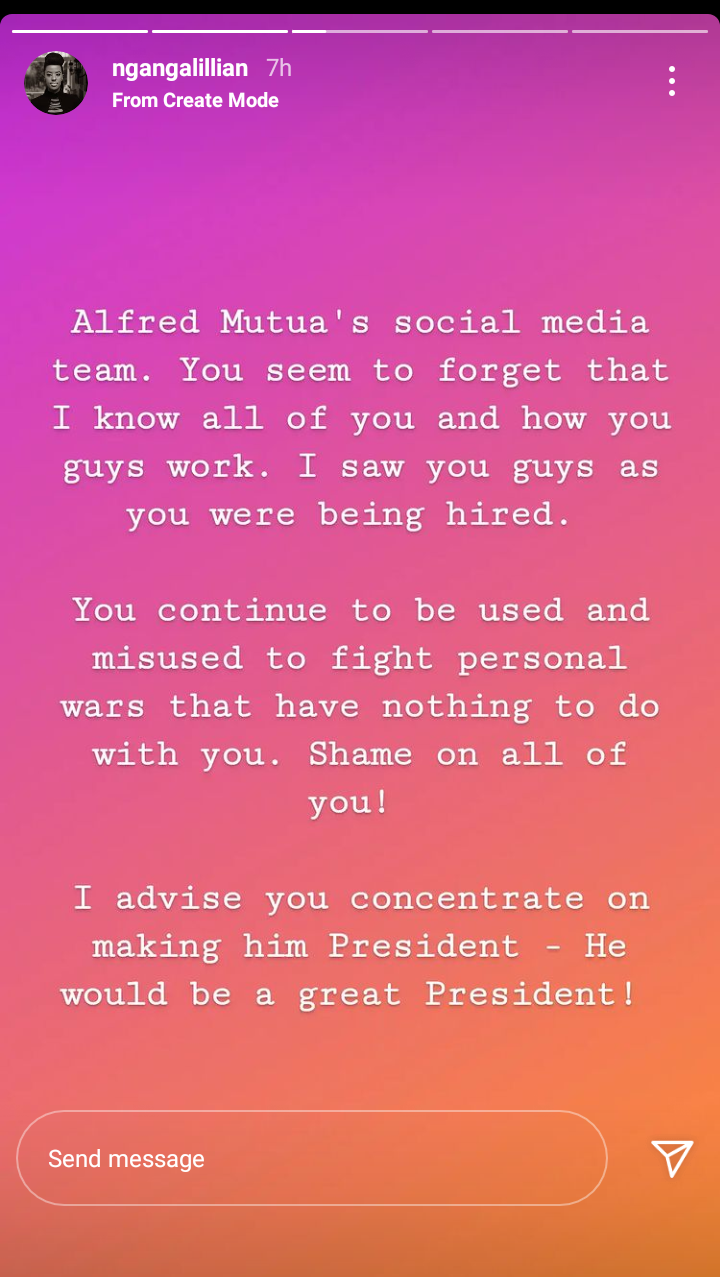 “No one should be used to settle scores they know nothing about through a few hundred shillings. I advise you to concentrate on making him President. He would be a great president!” 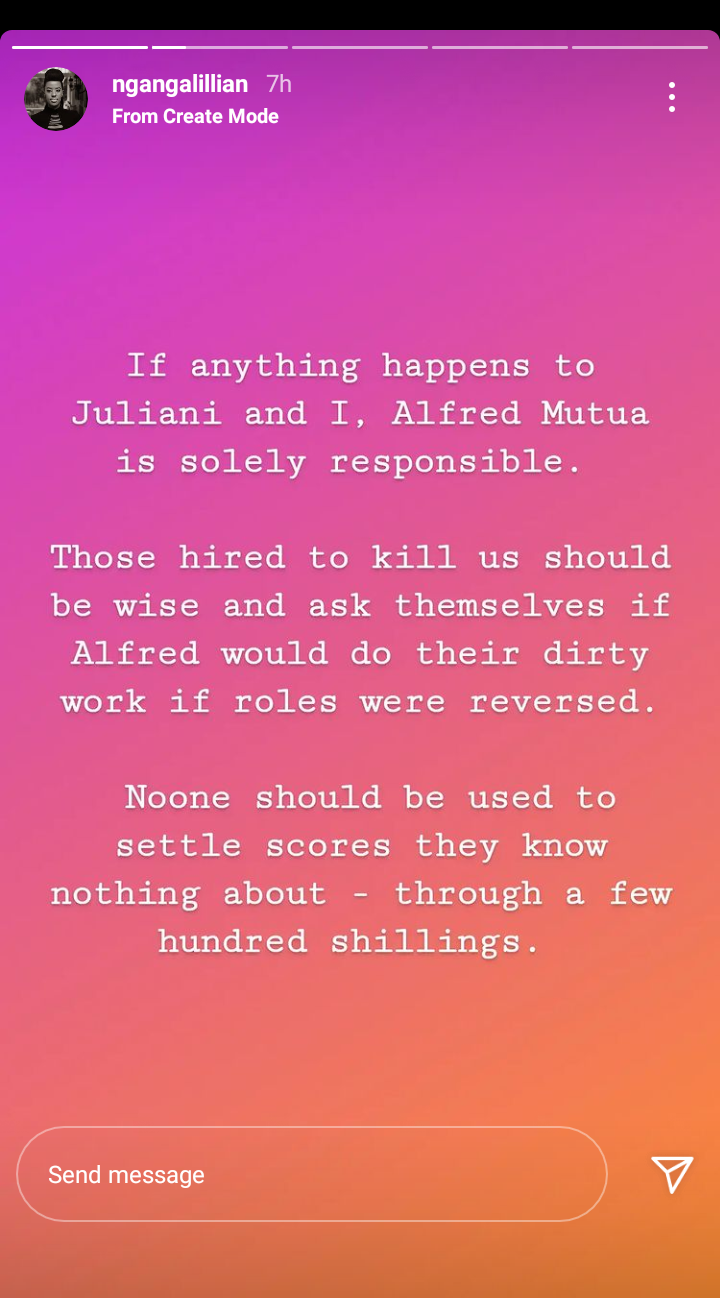 Lillian also addressed the trolls who accused her of using the Governor for material gain. She set the record straight and said that she does not care for material things.

Lillian said that the Governor tried to get her back in August by bribing her with a new vehicle. 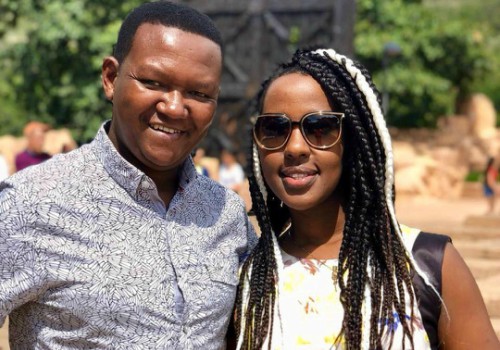 She revealed that he even promised her a white wedding to officiate their union, but she declined his suggestions.

“And for all those whose only attack line is material things. Alfred bought me a new car 2 months ago. I returned it to the dealer. He offered to buy me a new house, support me financially, get me a job, I declined. He offered me a white wedding, I declined. Value yourselves. Attack people when you have truths.” Lillian concluded. 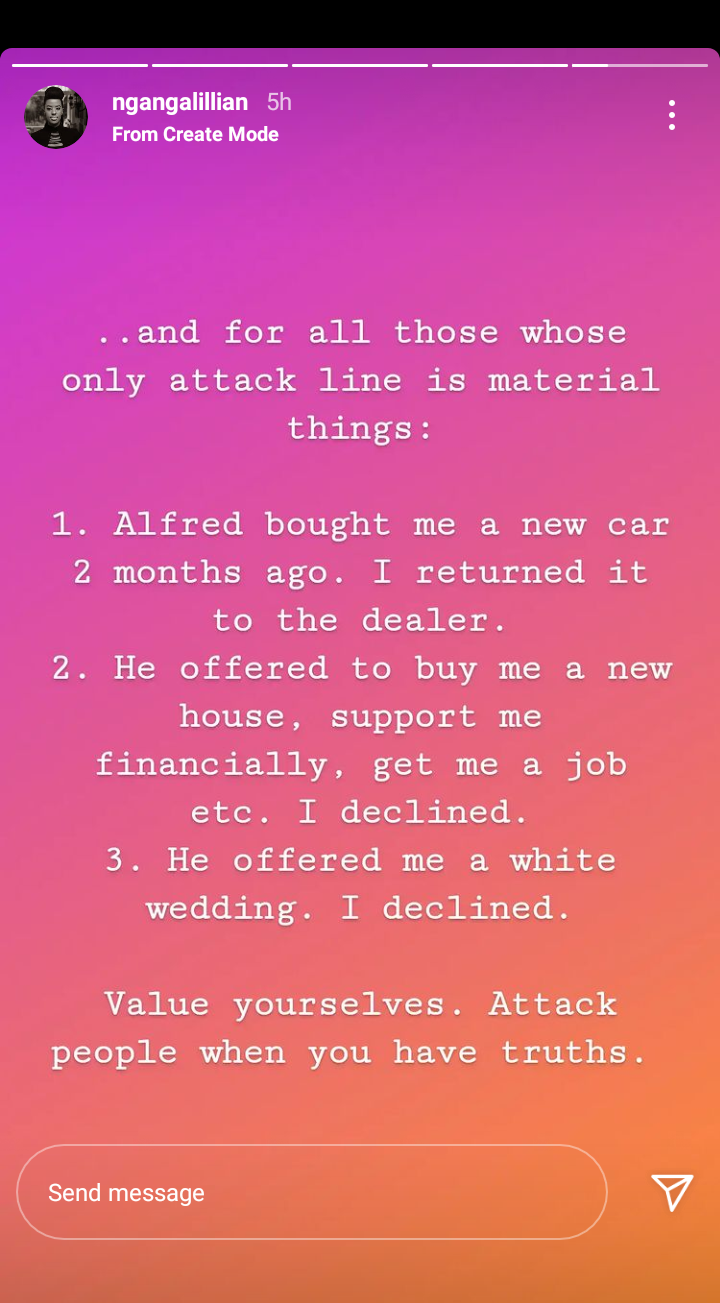 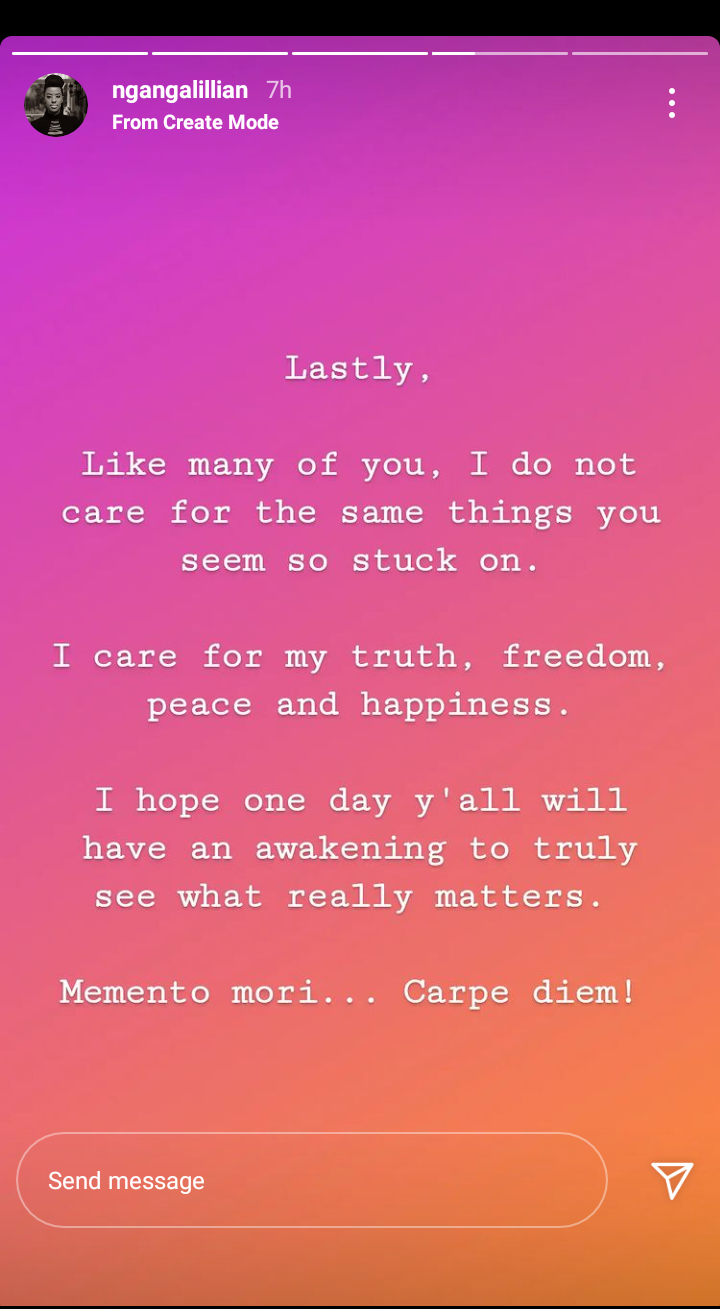 Lillian’s post comes a week after disclosing that her life was in danger following her separation from her ex-husband, Governor Alfred Mutua.

While speaking to the media accompanied by her Lawyer, Lillian said that Mutua has refused to come to terms with their split. She added that he has been issuing threats against her life. 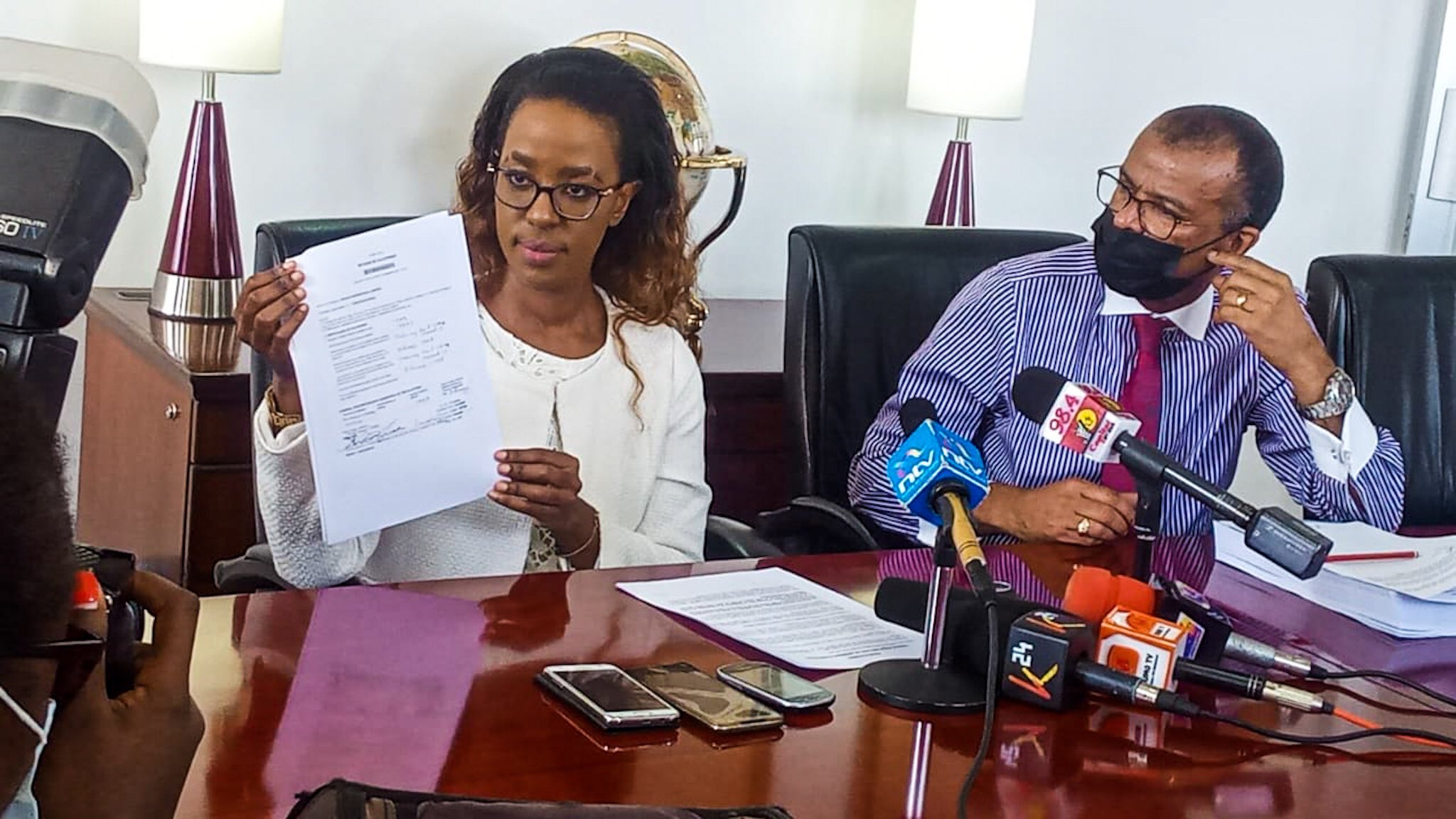 “Mr. Mutua is overreacting to our separation. As indicated I wanted to move on with my life and he thought otherwise”

Lillian added that their split was not as peaceful as the Governor revealed during interviews because he had been harassing her behind the scenes.

She further explained that the Governor asked her to pay back all the money he had ever spent on her. 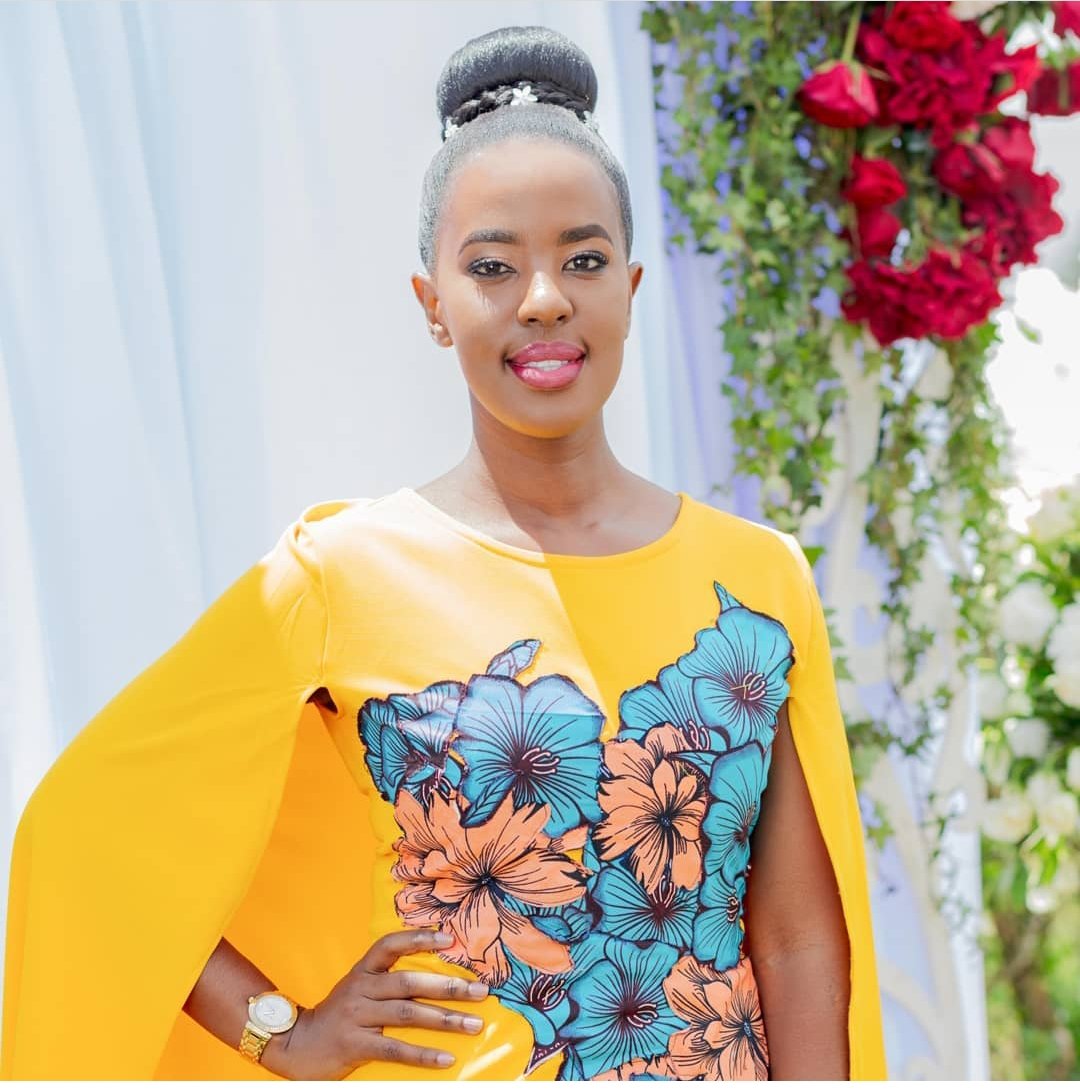 “He has demanded that I refund any money he has ever given to me or made available for my use. He also wanted to ham people close to me and he demanded I apologize retract the two statements I made on social media regarding our break up and I obviously declined” She said in a part of her statement. 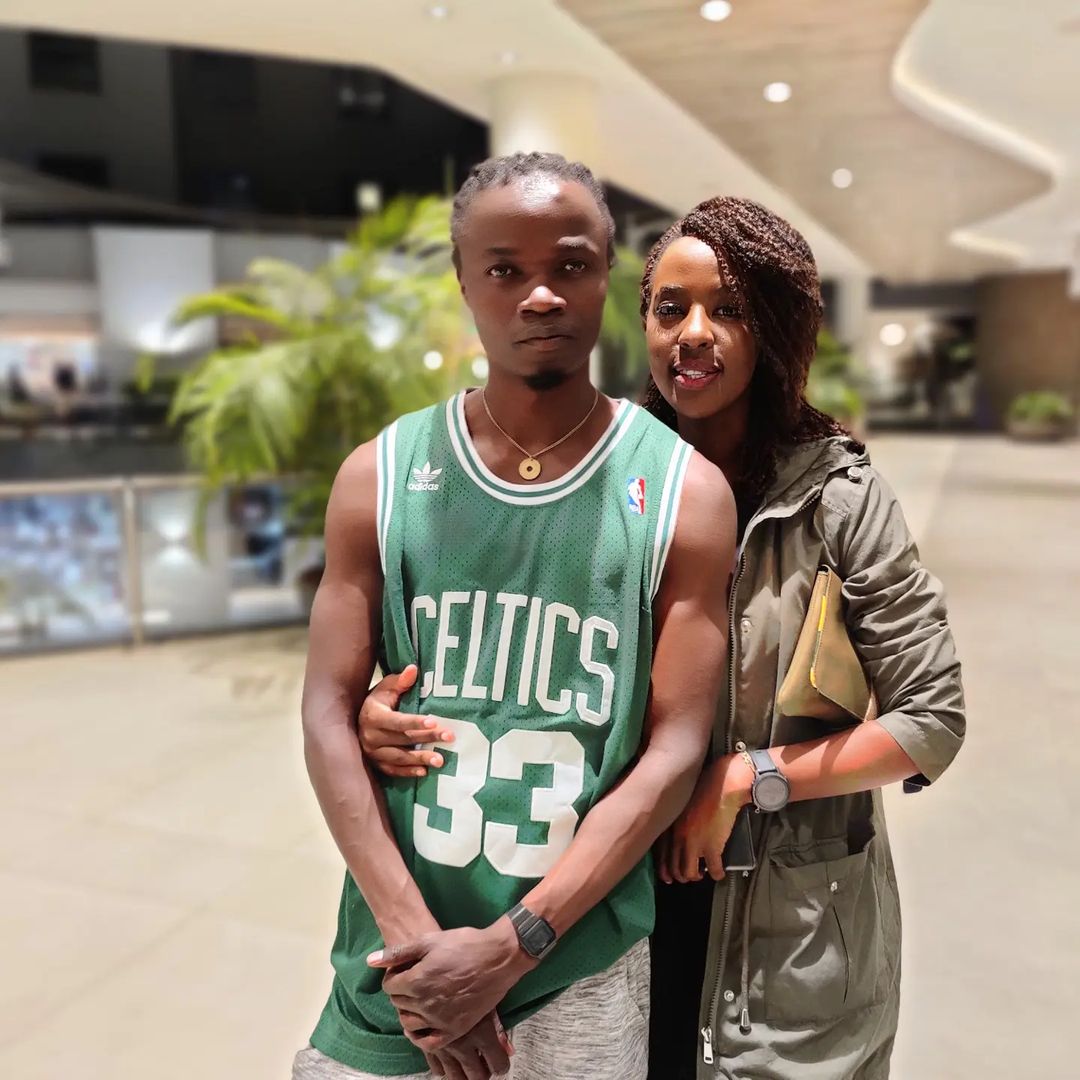 Lillian said that Mutua bragged about his influence in the country and told her that he had people willing to murder her close associates.

She added that he proudly boasted about taking up the deal because he could get away with anything.

“He stated that he had offers to kill persons close to me and threatened that he will actually take up the offer and teach some people a lesson. He arrogantly said that he is a very important person in this country, very powerful and can get away with anything he has planned to do to me and those close to me,” 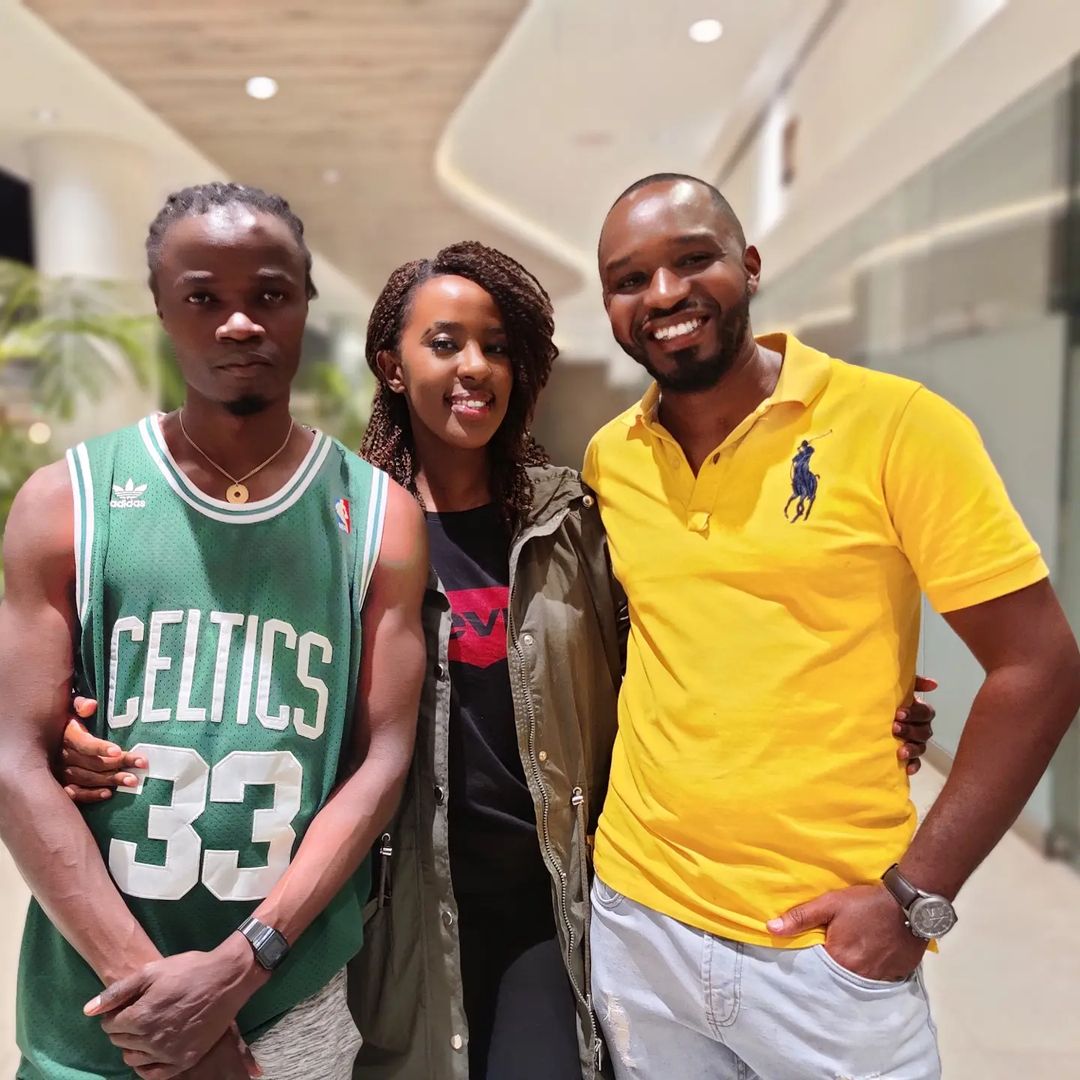 Lillian also revealed that on September 8, 2021, Mutua escorted by his police bodyguard, stormed her apartment in Kileleshwa and; took away her car and transferred its ownership to another person. 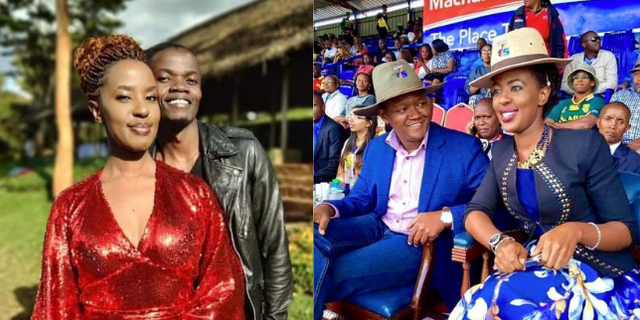 “Without my knowledge or consent and using a spare key which he had illegally obtained, he drove away my personal motor vehicle KBY 186G - a car which had been fully registered in my name since 2014. Mr. Mutua proceeded to fraudulently transfer the ownership of the car in the log book into his name, and thereafter sold the vehicle to a 3rd party” 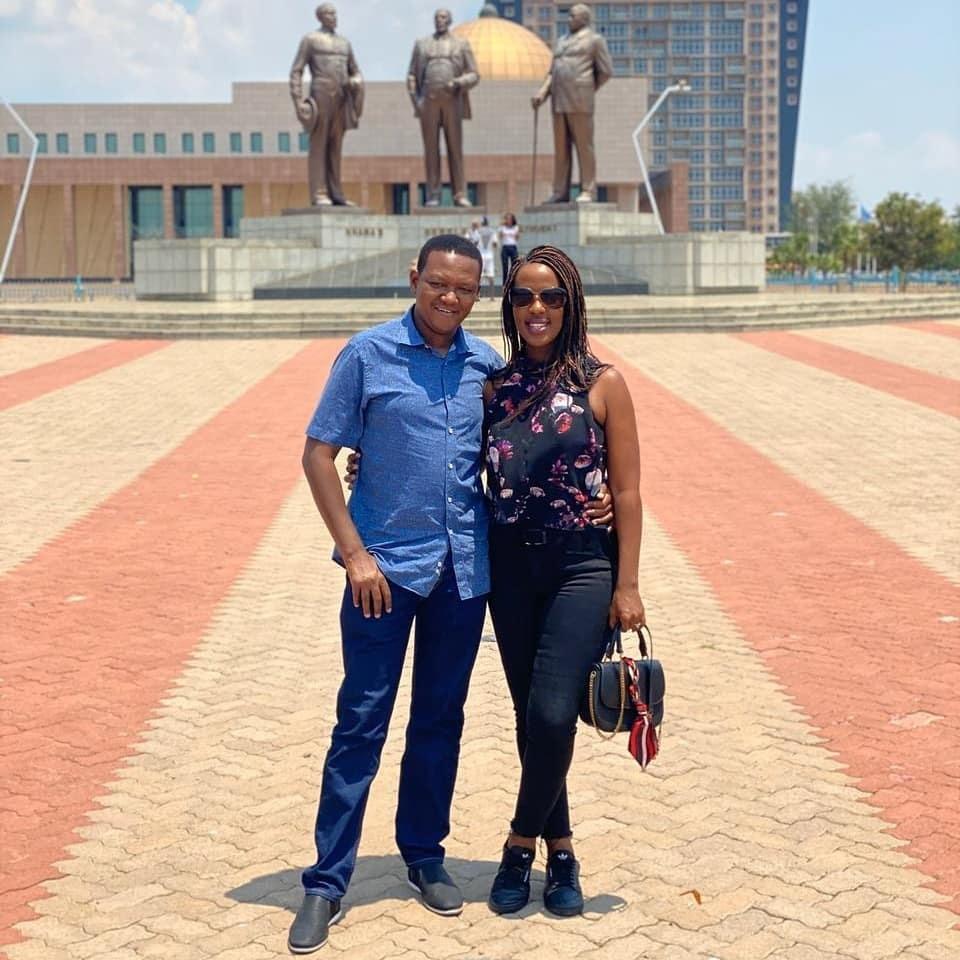 Lillian disclosed that she could not delve into details regarding her vehicle because the case was still in court. However, she warned the new owner to prepare for the outcomes.

“I filed a case which is pending in court so I will not comment further on it except to ask the purchaser to be on notice that I maintain my claim to ownership,” Lillian said. 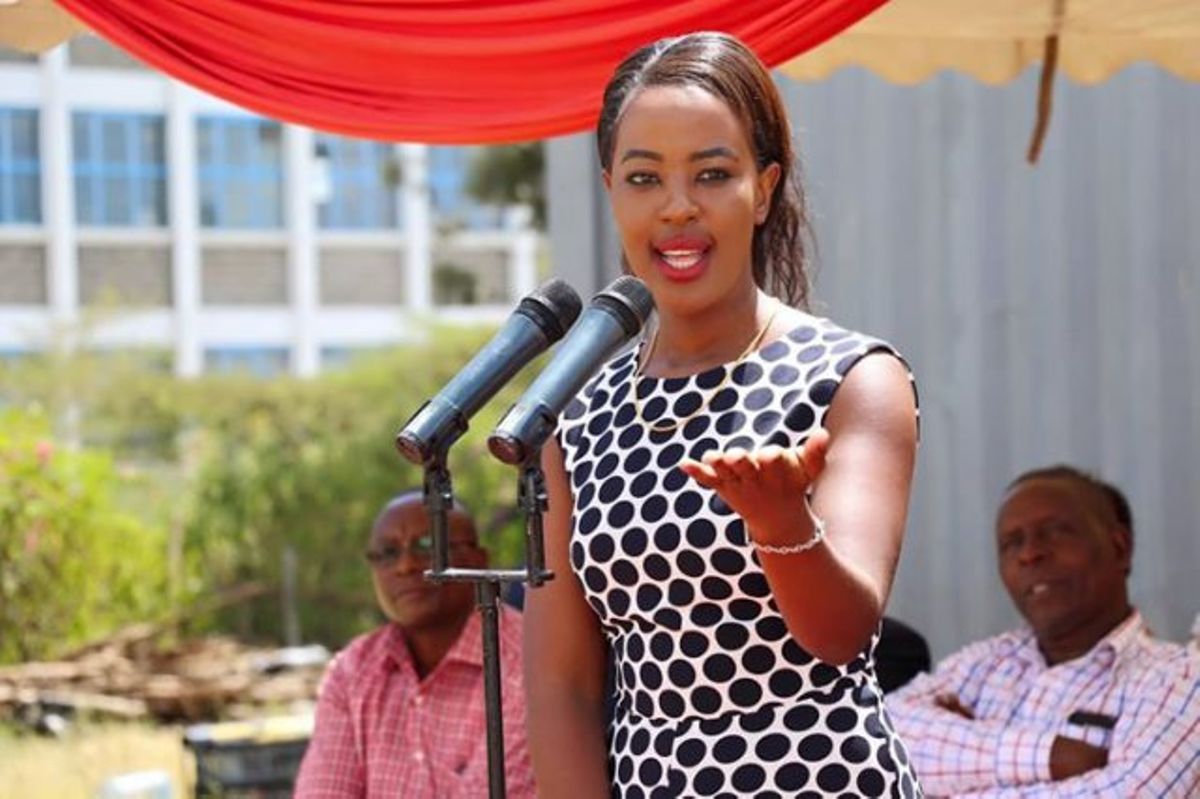